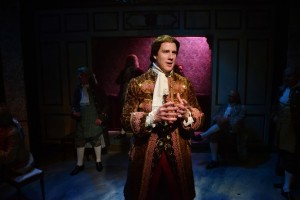 Half of the genius of talent is an artist’s ability to get others to support his work. Despite his stunning musical ability, Wolfgang Amadeus Mozart failed to cultivate patrons who could support his profligate lifestyle. Mozart’s unsuccessful business acumen led to a burial in a pauper’s grave.

Peter Shaffer’s fictionalized account of Mozart’s relationship with Austrian court composer Antonio Salieri posits that music is the easy part; negotiating the political mine field of art is hard. BoHo’s production is fun and frothy but can’t effectively capture the frustration and pain of an artist’s life.

Salieri (Steve O’Connell) is one of the most successful musicians in Austria when former child prodigy Mozart (Chris Ballou) settles in Vienna. Threatened by his talent and repulsed by his personality, Salieri makes sabotaging Mozart’s career his prime mission. He destroys Mozart’s relationship with key creative personnel at court and attempts to seduce Mozart’s wife (Amanda Jane Long). Salieri’s final machination demands that a terminally ill Mozart work on a requiem mass, essentially working him to death.

O’Connell successfully portrays the corporate creative face that a successful talent must present to benefactors, but doesn’t quite nail the aching desperation that comes from watching a life’s work effortlessly overshadowed. Ballou conjures the irritating interpersonal cluelessness that was Mozart’s downfall, but can’t carry off art’s weary grind.

Patrick Ham’s set manages to be simultaneously sumptuous and utilitarian; Theresa Ham’s costumes are a luxurious nod to a more opulent age. Peter Marston Sullivan’s staging captures the piece’s light side, but reduces the clash of the creative impulses to a heavy-breathing tussle that doesn’t do the conflict justice. The show is a sweet confection that doesn’t negotiate the subsequent decay. (Lisa Buscani)