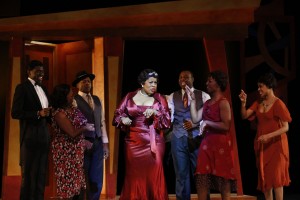 Walking through the cinderblock, cement and steel pipes of the parking structure and into the stark modern lobby of The Harris Theater at Millennium Park, I couldn’t help but be reminded that I wasn’t at my Daddy’s Opera House. Chicago Opera Theater opened its fortieth Anniversary Season, serving the greater community as both an addition and an answer to our famed Lyric Opera of Chicago, with a production of “Queenie Pie,” jazz-great Duke Ellington’s unfinished, flawed, but compelling “street opera.” Calling their 2014 season “Illusions and Delusions,” COT continues to exhibit its ambition to bring both a new audience to opera, and to present an alternative to Chicago’s already established opera-loving constituency, by offering a season completely devoid of any of the standard operatic repertoire. Past attempts to mix both expected and unexpected fare notwithstanding, general director Andreas Mitisek, who began his steerage of COT in June 2012, appears determined to sail into new and under-examined compositional waters.

But if the gray walls and steps of the Harris seemed to chill, the waiting curtain warmed with reds and yellows and oranges. When conductor Jeff Lindberg invited the Chicago Jazz Orchestra to sound the brass, the snare drum, and the ever-soulful saxophones of “Queenie Pie”’s jazz overture, and the curtain rose to reveal Danila Korogodsky’s 1930s set, bursting with color and Art Deco elements recalling both Frank Lloyd Wright and Salvador Dali, the Harris’ smoky guts spun out of sight as the full-house audience, threatening to burst the theater at its seams, fell into a lyric entertainment that defied labels. The hard-working ensemble began to undulate to director/choreographer Ken Roht’s Josephine Baker-inspired, erotically charged dance/pantomimes, flashing Dabney Ross Jones’ picture-perfect costumes; the electric expectations ran high. 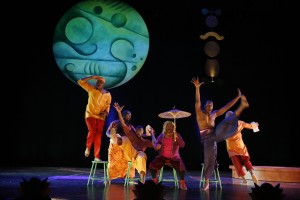 Ellington’s only operatic work was sadly unfinished at his death in 1974, and has survived multiple reworkings by artists of varying specialties. “Queenie Pie” has been heard in Philadelphia, Washington DC, Brooklyn, Oakland, California, and in the librettist Betty McGettigan’s version, created for Butler Opera Center at the University of Texas in Austin; COT has mounted the latest version. To date, productions of “Queenie Pie” have received less than successful responses. The simple, almost childlike libretto chugs along, and songs and musical meanderings frequently do not further the plot or enlighten principal characters. Injected dialogue proves only nascent, poetical and yet unsatisfying for the fleshing of the narrative. The overall effect of this lyric hybrid—part jazz club-renderings, part modern dance, part pantomime—must be experienced for its messages and its uniqueness. Together, Ellington and McGettigan have created what I might describe as Jazz Performance-Art. The sinuous music in concert with the themes of internal prejudice within a minority community, enveloped by Roht’s atmospheric interpretation, invites us to connect to a culture that continues to fight for representation on the operatic stage.

Karen Marie Richardson’s Queenie lends a generous figure, tone and presence that contrasts sharply with the petite, slender-voiced, light-skinned Café Au Lait of Anna Bowen. In their first meeting, Queenie sets the tone for the ensuing battle: “She better not be callin’ me heavy.” The two women squabble over supremacy of the African-American beauty-products industry and the man who is wrong for both of them. After Café Au Lait accidentally shoots the gentleman in question when he moves to prevent her from shooting Queenie Pie, both must reexamine their lives, and the prejudices that prevent them from familial connection.

Jeffrey Polk gives a genuine sheen to the characterizations of Lil Daddy, the piece’s own Figaro, who sends both women to an island where they have little choice but to sort out their situation and, once they arrive, is the island’s comical and wise Witch Doctor. The real joy of the evening is Keithon Gipson, possessed of a larger-then-life physicality and a burnished baritone to match. Gipson, a versatile artist with the most substantial operatic credits among the production’s principals, uses his considerable vocal skills to fill the house with his Act I solo, “Woman.” As both the cheating object of mutual desire, and the kindly island King who enlightens Queenie to her self-defeating narcissism, his characterizations are as deft as his vocal technique, one moment giving us the round tones of opera, the next sliding with Ellington’s saxophone stylings.

Next season, Lyric Opera will again offer “Porgy & Bess,” last heard there in 2008. Let us hope that the exploration of operatic works that reveal the African-American experience becomes more normative. And give us jazz, please. Lots more jazz. (Aaron Hunt)