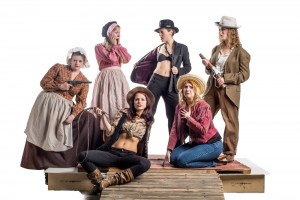 One of the earliest educational video games—“The Oregon Trail”—crosses paths with one of the earliest forms of entertainment—nearly naked ladies shaking it—in Gorilla Tango Burlesque’s latest collision of geek culture and burlesque. An enjoyable show and possibly a wish fulfilled for gaming nostalgists, “The Oregon Tail Burlesque: You Have Died of Sexy” may be about the most unlikely such mash-up you’re going to see—and it has a lot of potential.

Country and western music, for instance, is an ideal sonic dance backdrop for a show about hitting the trail westward. Yet, oddly, the musical selections don’t tap that goldmine. The women, dancing their way around such fabled threats as dysentery and typhoid, are lively, though the choreography is rarely riveting. One welcome exception is a fan dance, courtesy of one Polly Pom Poms who also has a notable flair for the comical. In fact, it’s comedy that saves this first-time burlesque outing from director Sabrina Harper. Much of the humor is flat (unlike the ladies!—thank you, I’m here each issue) but when the jokes do work they get big laughs.

Surprisingly the undeniable highlight of the show is unrelated to the rich source material, a trailblazing form of education about the Wild West. Indeed it’s actress Titty Titty Bang Bang’s turn as the gruff wiseacre noir private detective Big Dick that lifts the entire evening. She’s hilarious, knowing, spontaneous and in command of both the other characters in the show and the audience. She wins the crowd over from the start and doesn’t disappoint the rest of the night. She’s ostensibly trying to solve a mystery, but really she’s just there to unveil the humor. And it’s no big secret that funny is sexy. (Raymond Rehayem)