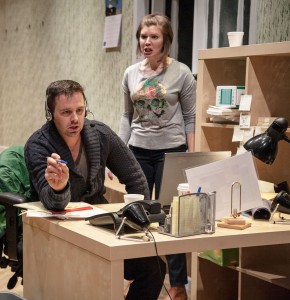 Insufferable people working unenviable positions for an inexcusable tyrant, the characters in “Assistance” are close cousins to put-upon office workers nationwide. Indeed, I’ve worked the sort of job this satire skewers. As in my professional experience, it’s not the material that’s most interesting but the pace and the performers that carry the day.

Following the promotion of the repellent Vince (John Taflan), assistant Nick (Brian Crawford) is left with the new girl Nora (Lauren Fisher) to toil for some unseen executive megalomaniac. This pair perform office tasks with an uneasy blend of disdain and desperation in an ever-escalating climate of fear and fealty until Jenny (Hilary Williams)—a Brit with an opportunistic fortitude—arrives and demonstrates at least one lower-rung participant in this organization is wise enough to game their hectic and abusive work environment to her potential benefit. References to leprosy fundraisers and other charity events hint their monstrous offstage boss may be some legendary philanthropist; the W logo on the door, this unseen president’s name—Daniel Weisinger—and the specific Hollywood pedigree of playwright Leslye Headland suggest the specific target is contemporary Hollywood mogul Harvey Weinstein.

Weisinger’s business is never revealed, nor is it relevant. This vagary leaves us all a blank screen (silver or not) on which to project our own work experiences and evil boss nightmares. It’s not what transpires that makes LiveWire’s production engaging. I don’t imagine I’d find a reading of this script terribly interesting; befitting a send-up of Hollywood work culture this is written much like a sitcom, albeit not a particularly funny one. It’s the strong staging, the sharp direction (courtesy of Joshua Aaron Weinstein, no relation), and the committed cast fully immersed in thankless and largely unlikable roles that bring us full force into the nauseating reality of office pointlessness, slavish workplace devotion and near-Stockholm Syndrome blind allegiance.

Most of the real “action” takes place offstage, with the infuriatingly self-important chief at the center of needless drama. This changes drastically in a dynamic final scene where a defiant Jenny makes undoubtedly clear her well-placed, if cutthroat, sole devotion to herself. It’s a bit of explosive fantasy that aims to make up for the preceding lack of heft in the slim storyline. It doesn’t add weight to what’s come before, but it is an effective and literal show-stopper that offers the scheming usurper in Jenny a chance to shine. And it’s just the sort of wish fulfillment that you may daydream over as you try to make it through another day at the office on Monday. (Raymond Rehayem)