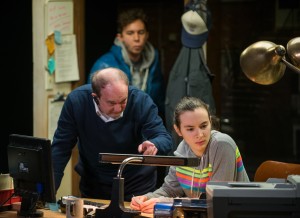 Like “Tribes,” which recently closed at Steppenwolf, this production centers around a tight-knit family whose precariously balanced levels of love and annoyance with each other are thrown for a loop when a new member is introduced into their ranks. In “Tribes” it was Sylvia, a well-meaning girlfriend who pushed the deaf Billy to want more from his life and his family, and in “Russian Transport” it is Boris, a not-so-well-meaning brother of the family matriarch who pushes his nephew to want more than a completely legal job supporting his family.

Playwright Erika Sheffer’s dialogue (a mix of Russian and English) has a nice flow to it, mixing comedy with drama and the heavy topic of international sex trafficking, but under Yasen Peyankov’s direction, the show moves at such a languid pace that in its almost two-and-a-half-hour running time there’s hardly a moment of true suspense or genuine comedy. We can see where this is headed early on when Boris (a cool Tim Hopper, handling a potentially caricatural role with aplomb) arrives in New York from Russia to stay with the family of his sister Diana (a miscast Mariann Mayberry).

Almost immediately Boris goes to work setting up his lurid business—luring young girls from Russia to New York with promises of modeling careers only to exploit them (see the excellent documentary “Girl Model” for a true-life portrayal of this reprehensible practice). Boris’ brother-in-law Misha (a gregarious Alan Wilder) runs a struggling car service that his son Alex (an impressively nuanced Aaron Himelstein) drives for from time to time (while also juggling a second job at Verizon). Boris sees Alex’s desire for more money and higher status and offers to make him a partner in his business—he only has to do a few “pick-ups” from the airport. The central moral struggle here falls on Alex’s shoulders as he wrestles with the quandary of providing for his own family while bringing ruin into the lives of these unsuspecting young girls. 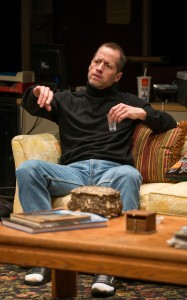 Unfortunately, though Himelstein embodies Alex’s struggle with a tortured dignity, the implications of this heavy question just don’t translate in this production. Aside from Hopper and Himelstein, the cast seems to be projecting broad characterizations that mostly fall flat. Beneath a thick Russian accent, Mayberry swings between wild anger and cutesy motherliness that prevents us from seeing the true protectiveness between her and her children that the script implies. Similarly, Wilder feels too bent on playing up his laugh lines to connect—when he becomes more somber in the second act it almost feels like a whole new character rather than a change in the existing one. And Melanie Neilan is excellent as three young Russian girls (the juxtaposition between her character’s life and theirs is notable, as is her shifts in characterization) but she sports a spotty accent and a lack of projection as Mira, the youngest member of the family. These portrayals create a fractured family whose cohesiveness is hard to grasp; they seem to operate as entirely individual units.

The unusual set design by Joey Wade doesn’t help matters much. The family’s living space spreads out through the middle of the Steppenwolf Upstairs Theatre with a staircase leading up to young Mira’s elevated room nestled against a wall. There’s an office space that at first feels like a separate location before it is eventually integrated into the home unit. It’s a tough space to play across and provides a few odd scene changes and directing choices.

There’s promise in this production if it can be provided with a jolt of energy and more cohesive acting choices, but it feels rather lackluster at the moment. For all its flaws, “Tribes” felt as though it was getting to the root of a particular family dynamic. “Russian Transport” has plenty to explore but it doesn’t currently go beneath the surface. (Zach Freeman)