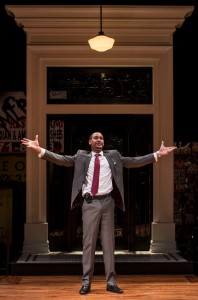 At its best, theater uses its characters and their stories as vessels for big ideas, for provocations that make audiences think about new concepts, or to consider old notions in new ways. And, at its best, it does so organically, with characters and a narrative on its own so compelling that the ideas sort of sneak up on the audience. Very few plays reach such ambitious heights, though, and it’s not at all unusual for the narrative to take a back seat to the ideas the playwright’s eager to discuss.

This is the case with “Buzzer,” now at the Goodman. Jackson is a young black man (played effectively by Eric Lynch) who escaped the rough New York ghetto of his youth to go to prep school and Harvard and now is a prosperous lawyer moving back to his old neighborhood, for no other reason than real estate, to be an unabashed force for and benefactor of gentrification. With him comes his attractive white girlfriend Suzy (Lee Stark, suitably earnest) and his best friend Don (a lively Shane Kenyon), a white rich kid who’s lived his adult life to date in a spiral of addiction and rehab. Not surprisingly, complications arise both externally, when Suzy experiences a fear-tinged discomfort over a daily gauntlet of catcalls from a group of neighborhood guys hanging out near their apartment, and internally, where the seemingly equal love Jackson holds for Suzy and for Don strives for an unrealistic equilibrium. Director Jessica Thebus drives home Jackson’s dilemma by at times arranging the actors in a neat (love) triangle on a stage set with audiences on all four sides, designed by Walt Spangler as a sort of Ikea model apartment amidst the graffiti-tagged street signs of a neighborhood still in the early phase of its gentrification. That the characters never seem fully real, more archetypes than human beings, is the central fault of this production. But the concerns they exist to stir up, though not new, remain urgently relevant in a culture that still seems to think it’s understandable to kill a young black man for wearing a hoodie or for playing loud music obnoxiously. 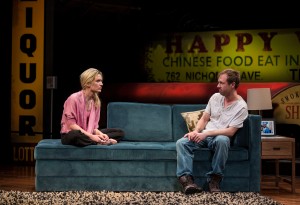 Playwright Tracey Scott Wilson has crafted a play about race very much in our present, with young characters who grew up after the civil rights movement, after the ascent of hip-hop culture into the mainstream and concurrent with the election of Barack Obama. While race is still a minefield, so too increasingly is class, where those who’ve always lived in this neighborhood now feel unwelcome in the presence of their new upscale neighbors. And while the two white characters seem rather content in their state of post-racial enlightenment (Suzy’s trouble with the street hecklers is as much a gender issue as a racial one), Jackson can’t shake it, even though he’s by far the most successful member of his little “family.” Even before things start to really unwind, he jokes about being “the magical Negro” to his white life mates—mates he’s chosen—betraying an inability to get comfortable in his own skin, so to speak. He covets every aspect of what he sees as “white privilege”—including manicured suburban lawns—even as he resents the unearned currency that it brings to Don, who is estranged from his wealthy family but never fully out of the range of its safety net.

Two images of blackness prevail in “Buzzer”: In the forefront, the besuited, articulate professional Jackson, fair-skinned and lanky, is wholly non-threatening to any audience. But on the streets around them, manifest in a periodic silhouette behind the locked glass door that keeps that world at bay, is the “thuggish” black man from the neighborhood, a menace by just his physicality and dress. It’s an uncomfortable truth that the audience has to come to terms with: that as much progress as we like to think we’ve made with race in America these last couple of generations, adding the question of class increasingly stirs up an uncomfortable frisson.

Who among us lives in a building like the one portrayed, for example, and has not opened the door willfully for some strangers but not for others, based solely on appearance? Even the most progressive of us, white or black, have a hard time finding the line between pragmatism and profiling. (Brian Hieggelke)