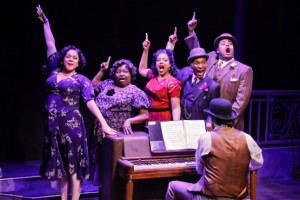 To add to Chicago’s celebration of Black History Month, Porchlight Music Theatre sends a jazz-jolt to Chicago’s February theater scene with a musically rousing, historically revealing production of the “Fats” Waller-inspired “Ain’t Misbehavin’.” Originally conceived as a cabaret show, “Ain’t Misbehavin’” was so popular that it transferred to Broadway, winning three Tony Awards in 1978, bested in the Musical Theatre categories only by the Comden-Green/Coleman “On The Twentieth Century,” which carried away five brass and bronze, nickel-plated medallions. A glimpse into the Harlem Renaissance of the 1920s and thirties, when segregation’s stigmatization fell away from dusk till dawn at the Cotton Club and the Savoy Ballroom, even while the sun’s first rays reinvented racism afresh, Porchlight’s “Ain’t Misbehavin’” pulled the sold-out audience to its feet long before the final medley gushed into the curtain call on the night I saw it.

Porchlight has assembled a production and performance crew from its extended theatrical family, and the comfort level thus established is palpable as soon as you enter Stage 773’s Pro Mainstage. Jeffrey D. Kmiec, having recently contributed stage designs for Porchlight’s productions of “Lady Day at Emerson’s Bar & Grill” and “Double Trouble,” and whose work for Northlight’s “Tom Jones” is currently on display, welcomes the club’s guests with an intimate setting of blue columns, tin ceiling, parquet floor, art nouveau balustrades, ample-but-unobtrusive seating for the five-piece jazz orchestra, and ubiquitous bar, all overseen by Thomas “Fats” Waller’s portrait, his open-toothed, molar-displaying smile and ever-twinkling eyes, crowned with his ever-present bowler hat. 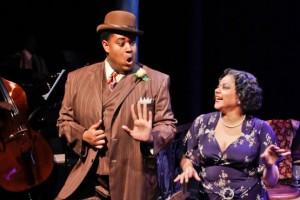 Austin Cook, who graced the first national tour of “Million Dollar Quartet” with his turn as Jerry Lee Lewis, set the scene by arranging chairs, gagging a hopeless battle against the dive’s dust, and finally settling onto the bench of the upright piano from where he would make the piano an extension of a character, pushing into the soundboard of the instrument with such abandon, it was forced to dance along. I thought Cook must have cuticles of steel to be able to gift so many finger-wrenching piano glissandos, but by the second act I caught him stealing moments between chords to pop the punished thumb of his right hand into his mouth for a moment’s cooling. His burnt-orange shoes, always dancing (either on the pedals or on the dusty parquet) had to be oversized; no one has “feet” that are that much “too big.”

Brenda Didier, a longtime choreographer in the greater Chicago area, continues her tenure as a director/choreographer, a special echelon in our city’s theater stratosphere (the ranks of whom include Jim Corti, the artistic director of Aurora’s Paramount Theatre, and the highly acclaimed Rachel Rockwell) that allows an uninterrupted performance vision from acting to singing to dance, and she doesn’t disappoint. Didier’s understanding of “Ain’t Misbehavin’” as both a celebration and a commentary is delivered by her cast of Robin Da Silva, Sharriese Hamilton, Donterrio Johnson, Lorenzo Rush Jr. and Lina Wass who hit all of the vocal and emotional highlights, skipping none of the imperative moment-to-moment transitions, and moving in and out of dance so seemingly naturally that a moment of movement seems as natural as Gene Kelly’s wet-lamppost routine. 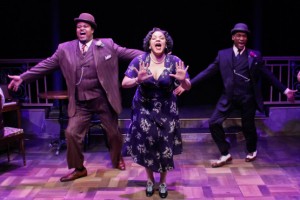 Da Silva, in the track that made Nell Carter a star, delivers Waller’s own “Honeysuckle Rose” with a pliant voice that spends so much time speaking the words that her moments of tone-spinning lyricism serve to suddenly remind the listener that her stories are actually being sung. Wass, possessed of the type of silvery tremolo that soothes and invites at the same time, has given Porchlight’s audiences both a charmingly hesitant Marta in “Company” and a glorious turn as Sarah’s Friend in “Ragtime”; here she makes Waller’s “Squeeze Me” just the right amount of naughty. Hamilton, fresh from Porchlight’s “Pal Joey,” brightens every moment with a girlish naivety that we discover to be a finely honed calculation when she sashays upstage after cooing through “Keepin’ Out of Mischief Now” and we catch her fingers crossed behind her back. Johnson, who bears an uncanny resemblance to André De Shields of the original cast, keeps the audience on the edge of their seats for “The Viper’s Drag,” with its unashamed celebration of “the reefer.” And Rush nails it with his voluptuous tenor voice crooning one minute, shouting the next, and imitating the infectious Waller cackle.

But “Ain’t Misbehavin’,” as conceived by Murray Horwitz and Richard Maltby Jr., never lets the joint’s jumping take us too far away from the realities of the African-American daylight experience of the Tin Pan Alley days. What will stay with me for a very long time are lyrics from the song “Black and Blue,” sung in close harmony by the entire cast:

I’m white…inside…but that don’t help my case / ’cause I…can’t hide…what is in my face / How would it end…ain’t got a friend / My only sin…is in my skin / What did I do…to be so black and blue. (Aaron Hunt)