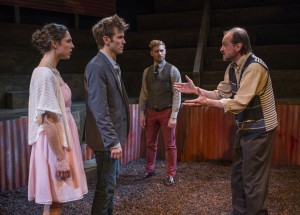 Sexual orientation is all too often reduced to an either/or binary—straight or gay, one or the other. Bisexual or pansexual people are presented by both straight and gay communities as confused or greedy. Mike Bartlett’s 2009 piece looks at the ironclad categories we put each other in, the problems that occur when a man begins to doubt the basics of his sexual identity and the push-back he receives from those who claim to love him.

John (Christopher Sheard) attempts to break free of longtime boyfriend M (Jake Szczepaniak). During their relationship respite, John befriends W (Eleni Pappageorge) and sleeps with her. Confused and lonely, he tries to reignite the relationship with M and confesses his relationship with W. He suggests both lovers meet to discuss the situation; M brings his father (Larry Neumann) to the meeting as back-up.

It’s an interesting premise marred by the fact that Bartlett writes M as a screeching, spoiled bully. While it’s important to establish the reasons why John and M’s relationship is failing, Bartlett doesn’t give John much reason to stay with M. Both Szczepaniak and Sheard negotiate the language and intensity skillfully—Szczepaniak could play tenderness if the script asked it of him—so the problem isn’t with their performances. Pappageorge nails the sweet quirkiness in W that makes for an interesting counterpoint, but W is so loving in comparison to M, one wonders why there’s even a problem here. Neumann’s character makes his devotion for his son clear. Interestingly, he is enlightened yet conservative, too mired in memories of the way sexuality was once viewed to embrace all that it could be.

Katie-Bell Springmann’s gargantuan cockfight arena transforms the space and drives home the metaphor; relationships of any sort can become a peck-fest if we’re not careful. Darrell Cox’s direction stays on top of the talkiness but his blocking puts John on his knees far too often before a man who claims to love him. Lovers should be wary of submission like that, no matter who they’re attracted to. (Lisa Buscani)