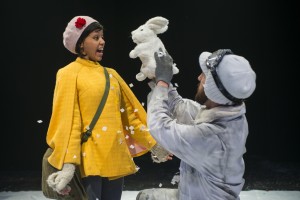 Chicago winters teach a myriad of things: the fine art of layering, new terms like “polar vortex” and, among other things, how to be resilient. The House Theatre’s production of “Rose and the Rime,” directed by the company’s artistic director Nathan Allen, also teaches its audience quite a few lessons. Namely, that winter is a cold-hearted Witch, or at least that the season is caused by one.

From the moment the audience enters the theater, patrons are submersed into the scenery. “Snow,” made of white gift-wrap tissue, lightly falls from the ceiling and one might feel like one is in a live snow globe. Once the show begins, the audience leaves the blistering, seemingly endless winter of Chicago only to be transported to Radio Falls, a town truly under “The Curse of Winter.”

As in any good fairy tale, it’s a community off of any known map meant to feel like Anywhere, Middle West U.S.A. It is here that we meet Rose (Paige Collins), a charming young girl who enjoys chatting with bunny rabbits and sharing her hot cocoa with them. She greets all of the townsfolk with jokes and smiles and behaves as most kids do when there’s snow, snow and more snow to be played in. It is the characters in this scene that bring color to an otherwise monochromatic black-and-white set. The ensemble (Ericka Ratcliff, Christine Mayland Perkins, Kara Davidson, Jeremy Sonkin, Dan Toot and Tamara White) works in harmony, rhythmically tackling their daily shoveling while trying to get Rose back home to her Uncle Roger (Michael E. Smith).

Upon her return to the indoors, Rose asks Uncle Roger to tell her the story of Radio Falls and how they came to live there. As he tells the tale, the way he has apparently told it hundreds of times before, Rose begins to question him and the story in ways she never has before. Between the storytelling, the incessant questioning and the revelation of the Rime Witch (Ericka Ratcliff) and the spell she cast over the town to create a perpetual winter, there is as much laughter as there is despair. In the end, however, Rose, being a strong-willed young girl, feels that she knows how to best break the curse. She forges a plan and sets into motion a cycle of events with elements similar to many fairy tales—a runaway character finds fun in a magical adventure; the adventure becomes scary, even dangerous; just when it seems like the end might be near, the character finds a way home and the town rejoices.

In this case, the joy is met by the return of the sun and all the activities warm weather brings. The cast happily shares their barbeque cooking and root beer with some audience members as Radio Falls is back on the map and open to tourists. Two particular tourists, brothers named Charlie (Sam Guinan-Nyhart) and Jimmy (Brandon Markell Holmes) are enchanted by more than the atmosphere of the quaint little town. They both become smitten with Rose, who has grown into a young lady. As Rose enjoys her very first hot dog, Jimmy professes his love for her in a cleverly written and hilariously executed Motown-inspired song. The couple is happy, maybe a little too happy for the town’s liking. Little by little the audience begins to remember why its writers classify the play as a modern myth.

Many mythic tales have more than one meaning. This story is no exception. The play is packed with symbolic elements, inspired body movement, and aerial acrobatics, all tactfully contributing to the story so there is never a dull moment. Whether one takes away from the show nothing other than that people go mad when left in any predictable situation for too long, or the timeless lesson—be careful what you wish for—this production entices one to see the world a bit more magically. It also gives much-needed hope that with a little bravery, Chicago and its citizens can experience warmth in the midst of bitter cold, even if it’s only in the comfort of brilliantly executed theater. (Mary Kroeck)