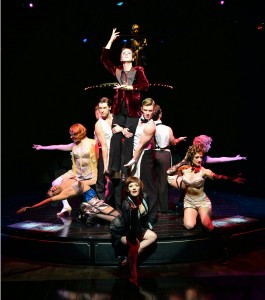 The Marriott Theatre kicks off its 2014 season with “Cabaret, ” the eight-time Tony Award-winning musical, under the direction of David H. Bell.

The show centers on a young American writer, Clifford Bradshaw (Patrick Sarb), who comes to Berlin in 1929 in search of material for a novel he wants to produce. The Emcee (Stephen Schellhardt) is also a narrator of sorts who playfully invites all to forget any troubles of the outside world and simply enjoy the “beautiful” music, song and dancing of the girls and boys inside the Kit Kat Klub. Schellhardt’s charisma and allure continually keep the show moving. Even in the cutting and cleverly penned song, “If You Could See Her,” he successfully walks a fine line between humor and gutting insult.

Although British showgirl Sally Bowles (Megan Sikora) becomes enamored with Bradshaw and the two become “Perfectly Marvelous” partners in love and life, it is the elder characters of this production, Fraulein Schneider (Annabel Armour) and Herr Schultz (Craig Spidle), who are more fascinating than virtually anything that happens within the Klub. Armour and Spidle brilliantly balance each other’s characters out and emit sparks of true romance. Their enticing chemistry is particularly ironic since sexual innuendo is apparent in dialogue, a chunk of choreography and the costuming of the majority of the cast. Yet, the lethargic energy of it all comes across as much more PG-13 than R-rated (or for audience members sixteen and older, as the theater recommends).

As the show progresses, so does the reality of history. The characters’ carefree lifestyles begin to unravel with the rise of Nazi rule. Needless to say, in the end Bradshaw finds inspiration for his story as he recites, “There was a cabaret, and there was a master of ceremonies… and there was a city called Berlin, in a country called Germany… and it was the end of the world.”

The Marriott Theatre’s stage is in the round and the show’s set features a second-level catwalk that is rarely used but constantly visible. This catwalk is home to several mannequins that seem to serve little to no purpose. If they are meant to be club patrons, it’s unfortunate that they seem to get no attention from the plethora of actors on stage during any given Klub scene. Likewise, the orchestra is mentioned as being “beautiful” but they are nearly invisible and never on stage, giving the audience no way to judge if this is true. The ending of the show is often tricky to pull off well, as the libretto calls for the Emcee to melodically say goodnight and disappear, leaving no one on stage. Here, we are left with the cast on stage saying goodbye to the audience in an almost transient manner that feels less than final. It’s hard to tell if this is an intentional call on Bell’s part, reminding the audience that the Holocaust would go on for years with much of the world refusing to immediately intervene; or if this is just an attempt to wrap up the show without leaving the audience completely depressed.

In short, life may be a cabaret, but overall, this rendition leaves something to be desired. (Mary Kroeck)