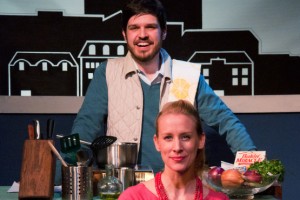 Billed as a psychological thriller, “Mishap!” is a mannered but engaging rumination on human relations, contrasting the genuinely dramatic tragedies and complexities of family life with the glib shenanigans of morning-news television programming. Or does it contrast cliched realities of the personal lives of public figures with the laughably melodramatic flourishes of soap operas? Presented in its U.S. premiere by Akvavit Theatre as the final installment of their “Nordic Cycle, ” Bjarni Jónsson’s short and spirited play jumps back and forth over the line between public and private life, all the while spotlighting the confined theatrical setting used to great effect by director Chad Eric Bergman and his cast who seem always in uneasily close proximity to each other.

There is a sense of being trapped, whether in a TV set, this tiny stage, or the hopeless lives they depict. First unveiled as a domestic drama intruded upon by smug, false, smiling newscasters, the play soon calls into question just which intersecting storyline is intruding upon which “reality.” The core narrative centers on responsibility for and acceptance of the play’s namesake, a family tragedy that is at times played for all its emotional worth and at other moments dismissed as a sidenote to a ridiculously doomed daytime television romance. The play’s origin may be Icelandic but the specific plot points—dangerous drivers, school strikes, evasive political leaders—are as local as our nightly news and when handled by the onstage journalists equally as shallow.

However faithful the humor and dialogue of Hilmar Ramos’ translation may or may not be to Jónsson’s original, it often succeeds by plying stereotypes of television vapidity, political insincerity and personal pettiness. The primary conceit—the ever-shifting blurring between reality and fiction, presentation and fact—can be tiresome at times. Perky interjections from the irritating newscasters into the unfolding sorrow of the main characters are funny but somewhat obvious. Yet overall these repeated transitions are rewarding and staggered in intervals which serve the escalating tension. After so many shifts and reveals, by the show’s final minutes any further sincerity of feeling seems suspect. This is the true mystery at the show’s core: can we really have feelings in our world of endlessly layered falseness? The sudden and powerful ending of “Mishap!” answers that troubling query in the affirmative. (Raymond Rehayem)