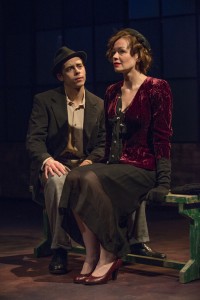 Coming at you with the beauty of a well-placed left-hand hook, the Griffin Theatre presents Clifford Odets’ heavily metaphorical masterpiece “Golden Boy.” A cautionary tale on the perils of choosing the false gods of fame and fortune, this play has been staged many times since its initial 1937 production. A recent 2012 Lincoln Center revival earned eight Tony nominations. It is hard to imagine that performance in any way outclassing what is playing right now on Belmont.

Nate Santana is impressive as violinist turned pugilist Joe. On the eve of his twenty-first birthday, Joe burns with a desire to truly begin his life, to move forward “like a bullet.” His Italian immigrant father, Bonaparte (Norm Woodel in an emotional performance that hits every mark) sees that future consisting of Joe’s continued mastery of the violin and spends a fortune on one for his birthday. Others, like Bonaparte’s good friend Carp (Jerry Bloom), are not so sure and wonder if “muses put bread and butter on the table.” Joe echoes that sentiment and is quick to turn his back on his family in order to pursue fame and glory in the boxing ring.

Away from his family, Joe drifts into the claws of the overly sensitive Moody (played by Mark Pracht with enough heart to be sympathetic) and the loudmouth, coarse Roxy (a very convincing John Connolly). Moody’s longtime girl Lorna (an exceptionally well-cast Nina O’Keefe) takes an interest in Joe which quickly turns up Moody’s jealousy dial. Eventually the well-connected Eddie (David Prete in a very calculated, menacing performance) takes Joe under his wing. Like Joe’s father, Eddie is an Italian immigrant but, unlike Bonaparte, he is ruthless in his pursuit of riches. All the members of this conniving surrogate family agree on one thing only: for Joe to truly be a great fighter he must learn to not hold back, to risk his hand (and any chance of ever returning to his muse, the violin) in order to cause damage with his blows.

Besides the superior acting, what makes this production special is director Jonathan Berry’s attention to the details. This is especially evident in his mastery of transitions, with actors often bumping up or otherwise briefly interacting with one another as some enter and others leave the stage. Besides being entertaining, these brief moments also serve to better define characters. Period-specific musical interludes between scenes also add much to the delightfully smoky atmosphere of the piece, like a trailing cloud coming off of Lorna’s dangling cigarette.

Berry also makes the most of the play’s two-hour-and-forty-five-minute running time by allowing key emotional moments to fully develop. The dialogue is still snappy and fast when it needs to be, but nothing ever feels hurried or rushed along.

All of this leads to a timeless theater experience that perfectly captures not only the rhythms and nuances of 1937 New York City, but also the constant tension between art and commerce. We might not all have to make choices as dramatic as Joe, but there comes a time when most of us are asked to make an artistic sacrifice in the interest of another pursuit. You had better understand what you are being asked to give up before answering. (Noel Schecter)