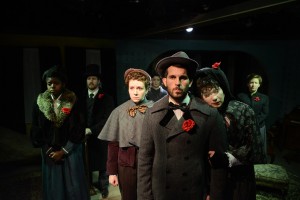 Eleanor Marx (Dana Black) is the heir to her father Karl’s throne, if such a thing is possible in socialism. She translates her father’s work and travels the lecture circuit, stumping for the cause. Marx also acts and translates novels and plays, starring in Ibsen’s groundbreaking work, “A Doll’s House.” But even the most preoccupied souls suffer loneliness, and Marx starts a relationship with married writer and philosopher Edward Aveling (John Ferrick). The two attempt to defy convention by living together outside matrimony, even when Aveling’s infidelities and fiscal imprudence plague the relationship. Even the most unconventional relationships face traditional problems.

Philip Dawkins’ high-minded script has problems as well. Dawkins has a solid handle on the show’s mix of humor and pathos, but the piece feels padded by the less interesting aspects of party politics and family life. Dawkins creates truly unexpected moments; his illustrations of Aveling’s cruelties surprise and genuinely sadden. But he doesn’t dramatize the deaths of Marx’s mother and sister in a short period of time, losses that also influenced her. Dawkins pushes his biggest reveals to the very end of the piece, keeping us mired in the quotidian doings of the movement.

Black has the charisma necessary to play a woman of impact; her seduction scenes with Ferrick are the humorous centerpiece. Eleanor is written so strong and independent that if I didn’t know her story was true, I’d have difficulty buying Dawkins’ ending. Some of the other parts are not written as strongly; the affable Matt Holzfeind does what he can with the underwritten role of Friedrich Engels. The show’s double casting doesn’t always work; Justine Turner’s casting as Marx’s nephew Harry feels tangential. This is an important story; for the most part, Dawkins tells it with wit and style. If he can pare it down, it’ll make a memorable biography of a memorable person. (Lisa Buscani)