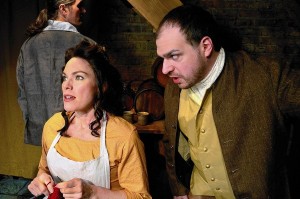 Watching Lifeline Theatre’s “A Tale of Two Cities, ” I found myself wondering what Charles Dickens would make of this adaptation of his novel about the French Revolution. Dickens himself was a man of the theater, and his novels often read like plays transformed into prose, brimming with dramatic exaggeration and an inimitable combination of melodrama and comedy. How hard could it be to turn the prose back into theater?

With its mixed success, this production shows that the process isn’t simple. Adapter Christopher Walsh and director Elise Kauzlaric capture the novel’s propulsive drive, the artful intricacy of its plotting, and its perfect balance and symmetry. What gets lost, however, in this tale of heroism, cruelty, romance and redemption during the best and worst of times is any sense of shading of character or complexity of situation. The adaptation—pared down of necessity and faithful to a fault—could use an occasional pause for reflection. While the story is told well, there isn’t quite enough effort to make it relevant and fully alive to today’s audience.

The familiar tale, imposed on (and generally forgotten by) ninth-graders everywhere, hinges on the love triangle of the genteel French aristocrat Charles Darnay (Nicholas Bailey), who heads to England to escape his family’s history of rapacity and oppression; British barrister Sydney Carton (Josh Hambrock), “idlest and most unpromising of men,” who defends Darnay successfully against trumped-up charges; and the angelic Lucie Manette (Maggie Scrantom), another French emigrée, who is pursued by both men and chooses the earnest Darnay. Darnay, more noble than smart, is lured back to France at the height of the Terror. There he falls into the clutches of Madame Defarge (Carolyn Klein), the embodiment of revolutionary vengeance, and her husband (Dan Granata), the staunch but saner leader of the insurgent masses of the Faubourg Saint Antoine. All seems lost, until a transformed Sydney Carton does a far, far better thing than he has ever done. 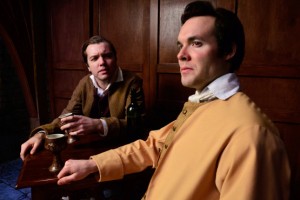 Like the Revolution, the story moves along swiftly and inexorably toward the Place de la Révolution, where the guillotine grinds away, dispensing its own form of justice at the rate of fifty heads a day. While the compact Lifeline stage (nicely compartmentalized by set designer Joe Schermoly) cannot contain mob scenes, the skillful sound work of Andrew Hansen compensates with muffled background roars, punctuated by the ominous ka-thump, ka-thump. The production delivers the thrill of the rising up of the long beaten down, as well as the terror and insanity of the Revolution’s spiraling violence and pitiless and indiscriminate revenge.

And yet on a human level, the play pulls its punches. With the exception of Dr. Manette (Lucie’s father, traumatized by eighteen years in the Bastille), the doughty Miss Pross (Lucie’s caretaker) and the alternately French-English narrator—played vigorously by Sean Sinitski, Katie McLean Hainsworth and John Henry Roberts, respectively—the characters lack the intensity of people living at the foot of an erupting volcano. Lucie is wispy and flat, and her one-on-one scenes with the pouty, overwound Sydney Carton are not successful. Dickens’ memorable characters have a mythical resonance: Madame Defarge is not merely a fanatical demagogue, she is one of the Fates, calmly knitting the doom of perceived enemies of the People. And the old Marquis, uncle of Charles Darnay (played by Chris Hainsworth), is not just any rich voluptuary—he is “a refined tiger … of the impenitently wicked sort.” Here, both are reduced to human scale, and the story too is more literal and less potent than the original, lacking the inky darkness that lurks in the background of Dickens’ imagination.

The real tale here is that of Sydney Carton’s transfiguration. Everything leads toward his moment of truth, which calls for a slowing of pace and narrowing of focus. But the director fails to rein in his galloping tumbrel of a narrative, and the iconic ending rushes by without giving us a chance to take in its emotional impact, still strong after all these years.

Lifeline’s production of this “Tale” is a rousing, engaging and intelligent show, a good introduction or reintroduction to a monumental work of literature. But if Dickens were to see it, I wonder if he wouldn’t wish that it had just a bit less allegiance to his well-chosen words, and a bit more to his expansive and thoughtful spirit. (Hugh Iglarsh)