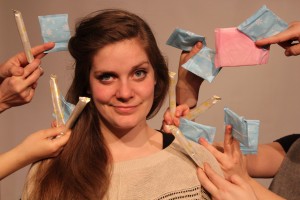 Five or ten minutes into “Period Piece,” I had nearly resigned myself to a show with little but its heart in the right place. Then, quite noticeably and suddenly, everything else clicked into place and I was off on a spirited, intelligent and emotionally true journey through time on a rather red river of hilarity.

Our hero Tammy DuPont has placed about as many pharmacological, intellectual and emotional dams between her and her monthly magic as playwrights Jenni Lamb and Lisa Linke have placed slang menstruation terms into this frequently uproarious script. A disastrous pitch to her longtime client from Forever Feminine hygiene products, the resultant falling out with her business partner and a surprise visit from her Aunt Flo (oh, that bothersome flow) conspire to force high-powered ad-exec Tammy to rethink her bitter, dismissive attitude about her period. The catalyst for this change of heart is a family heirloom gifted by Aunt Flo: a magical sanitary napkin belt which thrusts Tammy back and forth through time. On several stops through both world and DuPont family history (which generally intersect) Tammy confronts ridiculous, debunked “expertise” on women’s health, sexist doctrine on a woman’s place and her own unresolved feelings of personal loss and shame which are increasingly revealed to be the source of her views on menstruation.

A musical comedy about many periods throughout many periods, Playground Theater’s production is an impressive piece of work. It’s frenetic yet cohesive; informative yet humorous; angry yet delightful. Though they tire Tammy to no end, the musical numbers are never tiresome. The goofy dance/movement pieces not only provide laughs but help advance the narrative. The serious topics are handled comically. And rather than just rail against injustice, the resolute characters revel in strength. “Period Piece” accomplishes all this while mocking both the idiocies of the oppression of women throughout history and the more laughable cliches of the movement for female liberation in the eras we travel to.

The entire cast is commendable and at times remarkably funny. With the exception of the lead, each actress takes on multiple roles and they do so ably. Director Andy Eninger keeps what is often a madhouse from ever becoming a mess. And the script, while mostly dealing in humor, offers some genuinely tender moments. During the scenes with Tammy’s late mother, you might even feel a lump in your throat. Ladies, you may fear that’s your wandering womb rising out of place—a medical belief Tammy encounters during her stop in the Victorian Era. Convincing her young, bedridden nineteenth-century DuPont ancestor not to believe such quackery is just one way Tammy proves herself a qualified and likable guide through this appropriately hysterical temporal trek. (Raymond Rehayem)