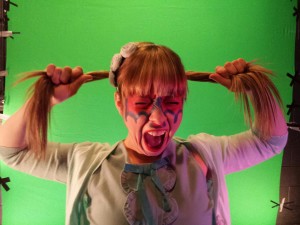 Asskicking Amazons attempts to be many things. Unfortunately it attempts them in generally heavy-handed fashion. Its combination of social commentary, exploitation-flick trappings and soap-opera melodrama could possibly formulate an entertaining amalgam and there are hints in Chicago Mammals’ current production of what a successful combination would look like. The show is overly long and too much of the humor is aimed squarely at easy targets, such as a rightwing Texas legislature power couple who met in their youth and have stayed true to each other, their love of God and their disdain for lefties. Commendably, the show does not reserve its satire or vitriol for only one side of the political aisle.

Set in the near future, the action concerns a protest/fundraiser staged by the feminist gothic punk band of the show’s title. The fundraiser is ostensibly staged to stave off the closing of the state’s last abortion clinic. Myriad social issues are woven into the script—free assembly and free speech; reproductive rights; gender identification; religious/cult allegiance. In some scenes these issues resonate; more often they seem like surface signifiers designed to elicit expected reactions. There’s a real B-movie aesthetic going on, which provides a visual style that nicely correlates with the frequent projections (the show relies heavily on video clips which provide background and context). The dialogue also seems lifted from a B-movie script, which lends an appropriate air of voyeurism and verite, but which does not serve to illuminate the complex issues at hand.

If you’re looking for a staged equivalent of a more overtly political Corman flick, the Mammals may be on to something. There are several storylines, some more engaging than others (some at times hard to watch), that build and lead up to the big moment: a riot that occurs at the protest/fundraiser and lands the protagonists in jail. In a classic B-movie maneuver, the big budget scene (the riot) occurs offscreen. We are notified of the occurrence by a pre-intermission announcement. Things pick up considerably after intermission, with the Amazon gals imprisoned or on the run and the script now focused on their abusive conditions behind bars and their upcoming trial.

Erin Elizabeth Orr gives an arresting performance as Libby, the more down-to-earth of the two founding Amazons we see onstage, who has troubled feelings about motherhood. Anne Wilson is sympathetic as Alex, imparting real feeling into her gender awakening. And Jack Birdwell is delightfully slimy as the Amazons’ unwanted state-appointed attorney.  He’ll say anything in the girls’ defense in his attempt to get them out of jail, just as he’ll tell any tale to advance his personal barroom goals. In the show’s one truly subversive twist, it turns out some of the lies he concocts are true. (Raymond Rehayem)