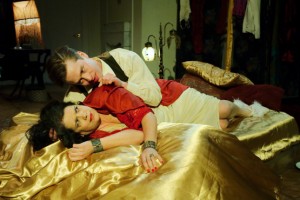 Having blamed the children in his novel “Les Enfants Terribles, ” Jean Maurice Eugène Clément Cocteau turns the tables on the adults in “Les Parents Terribles.” The story’s conceit is the descent into madness and disorder within an insular, highly dysfunctional family, brought about by the son’s decision to marry. This is upsetting to the mother, who is, at the very least, much too involved in her son’s life and, at the most socially horrific, his lover. This emotional coupling and its allied rejection has left the father intellectually impotent, seething with jealousy, and dreaming of revenge. The broth is kept at a constant boil by the sister of the mother, who has always been in love with the father, and attaches herself to the family as housekeeper-mensch, weaving her web and awaiting her opportunity. Unbeknownst to patriarch and progeny dueling for mother’s affection, both are bedding the same young lady. There is a great deal of weeping, wailing and gnashing of teeth. Aunt lies to sister, sister lives to manipulate, father and son hide their amorous relations, aunt plots against the girlfriend, father plots against son, and if there aren’t any outright disguises, the brilliantly outlandish costumes, and sometimes lack of clothing altogether, remind us that it’s Mardi Gras-time.

It would take a staggering talent such as Cocteau’s to marry farce with tragedy. Theatrical farce rides on the back of a fantastical plot, saddled with improbable situations, physical humor and oversized characters. The joy ride is reined in only by an implausible ending that allows all the players to return to their status quo, their former orderliness. Cocteau gives “Les Parents Terribles” nearly all of the tack necessary for the gallop. Revenge Tragedy bolts from the corral with the murder of the blameless if ineffectual, then races on with a haunting of the son by the restless ghost of the deceased, grazes on scheming and plotting and disguises and someone going completely bonkers, and finishes with a deadly rodeo-hullabaloo that leaves dead bodies all over the stage. This play is Shakespeare’s Danish Prince matriculating to Molière’ School for Married Ladies.

The urban myth that is The Artistic Home, a theater company stuck in the middle of nowhere run by a cohort of brilliant performers, directors, and designers who churn out one eye-opening production after another to full houses in such a cloak of anonymity that it almost feels as if a new audience member should rap three times at their door and have a password handy when asked, stays astride this jumpy masterpiece all the way to the finish line. Frank Nall’s polite, absent-minded father unpeels layers of passion and loathing. Miranda Zola’s sister is the babysitter from Hell. Kathy Scambiatterra’s mother flounces between comedy and tragedy with whiplash speed, and Julian Hester’s son is raving and loving and triple-jointed in at least five places that come to mind immediately. Everyone shouts, “UNBELIEVABLE!” repeatedly. Conceal a fan and a dagger on your person and run to see this show. (Aaron Hunt)