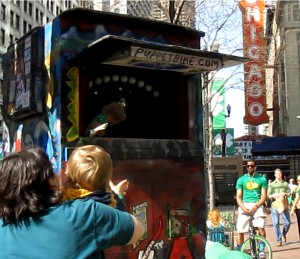 As a relatively recent Midwesterner, I associate Chicago with outdoor festivals, pop-up art shows and street theater. And while the Berghoff’s Oktoberfest and the Christkindlmarket cater to a certain type of Germanic nostalgia, the most endearing of all Chicago traditions comes in a brightly-painted box.

Most of us have seen the Puppet Bike in action on Michigan Avenue or in Andersonville, or perhaps glimpsed it in its sadly shuttered state in between shows. It doesn’t appear much in our recently punishing winter weather, and can be reclusive in the scalding summer heat. But when serendipity is in your favor, and you happen upon the syncopating Steiff animals in their slightly tatty glory, the show is suddenly for you and you alone. You’re standing there with your mouth open, a child again for a few wonderful moments.

Actual kids love it too.

As of January, the bike has been on the street for ten years, an amazing achievement for Jason Trusty, its founder and the original puppeteer. He initially meant it as a side project that evolved out of a coffee bike concept. Trusty has kept the Puppet Bike supplied with self-nominated puppeteers over the years, a roster limited only to those able to pedal the large, increasingly rickety structure around the city. The list has even included several women.

Early on, the bike was left open for people to try out at the Peter Jones Gallery, so there actually have been dozens of puppeteers. The puppet characters, usually animals, depend on the puppeteer and their mood, as does the music. There are dozens of puppets on hand and now nearly seventy songs in the playlist rotation. It’s distinctive, jaunty and often a little cheeky. The swing number “Ain’t Nobody Here But Us Chickens” with Louis Jordan particularly sticks in my mind, but thankfully, I have as yet to see a literal chicken puppet make an appearance during it. The rabbit, cats, crocodile and other animals that do their dance two (and sometimes even three) at a time make charming inter-species partners, holding hands, tenderly embracing, or hoofing it across the stage, swinging and finally, dipping their partners. In the right hands, these puppets have rhythm, a great sense of fun. They constantly interact with the viewer, popping in and out and around the side of the theater. But not everyone has the knack. 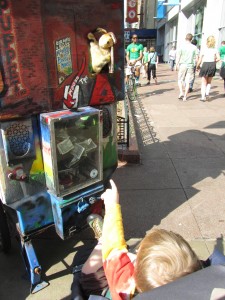 I recently spoke with the main Puppet Bike puppeteer about the experience. Relishing the anonymity behind the black curtain, he tries hard not to get into the Puppet Bike with anyone watching. His first impression of the bike, when he happened on it outside the MCA some four years ago, was that it “was funny and creepy.” For him, “making people laugh and giggle is the best thing in the world,” despite the somewhat cramped working conditions and threat of carpal tunnel.

There have been variously successful attempts over the years at taking adult puppetry into the theatrical and cinematic mainstream. But unlike “Avenue Q,” “Meet the Feebles,” and “Let My Puppets Come,” the Puppet Bike is that rare thing, an act that works for all audiences. (We’re not talking John Cusack’s inflammatory gyrating Abelard and Héloise puppets from “Being John Malkovich” either.) And still, the puppeteer has had people react in all sorts of ways to the performance, from uncontrollable giggles to outright anger. They throw things at the bike with excellent aim, offer unusual and sometimes illegal objects to the puppets, and sometimes even remember to tip. But it’s usually simply mesmerizing.

An unexpected Puppet Bike sighting makes a Chicagoan’s day extraordinary, makes them momentarily forget their troubles and illnesses, and sometimes shapes their futures. The Puppet Bike puppets have helped present rings for proposals, including one memorable occasion, to the tune of Black Sabbath’s “War Pigs.” The puppeteer mentions another incident when police cars surrounded the bike and the crowd of people watching, and used the side of the bike to handcuff a suspect. Most of the audience didn’t even take their eyes off the stage.

After a decade of broken bike chains and leaking roofs, the bike and the puppet theater are showing their age. Many puppets have worn out, and been retired along the way, but there is always a cat character. Famous local Puppet Bike fans include Daryl Hannah, Joan Cusack and Rick Bayless, but now Trusty has started an official fan club for the rest of us. This should help him make some repairs to keep the bike going for another decade. Donations of puppets also work.

Although there has been occasional interest in expanding the Puppet Bike empire, there is only one bike, which has traveled no further than Champaign, Illinois. It has never been duplicated. And in the spring, the puppeteer is going to let me try it out.