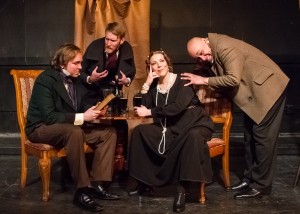 Self-referential by design, “The Earliest Known Photo of Men Drinking Beer” tries to say in thousands of words seemingly everything the titular photograph brought to the mind of the playwright. The script even addresses the inevitable use of the word “titular” when speaking of the play.

This often farcical production presents the staging of a reenactment of the taking of the famous photograph “Edinburgh Ale” as bound for tragedy. Though the actors break the fourth wall early in the show, they seem nonetheless trapped in a dangerous and frightful exercise which soon escapes the control or even understanding of the participants. The main intellectual considerations are human mortality, the possible permanence of art and the shaping of history and “reality” by art that outlives its subjects. A staged image from photography’s infancy is an ideal spark for such a discourse and the photo provides one identity for each of the play’s four characters. Each character has at least one separate identity as well. And each of these identities has more than one role within the action… 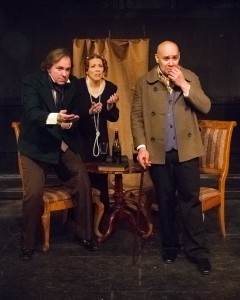 From the show’s constant shifts in time and space and all the resultant intertextual contemplation, it would be easy to say Drinking & Writing’s Sean Benjamin never met a wormhole he didn’t want to jump into. Benjamin switches between the character of author James Ballantine as pictured in the photograph, and the character of this show’s writer/director “Sean Benjamin.” All the while he is obsessed with the legacy of his written word, whichever writer he may be. Responsible for the staging of the photo and also a subject in the photo, David Octavius Hill (Steve Mosqueda, also appearing as “Steve”) aims to double his chances at timeless renown, all while sensing his notoriety is tied to his ill-fated partner behind the camera, Robert Adamson.

As Adamson, Kevin Alves plays to the show’s greatest strength: desperation. Unwilling, or unable, to break character, Alves is always Adamson, even when the rest of the cast implore him to join them outside of the nineteenth century to discuss (here and now) just what’s going wrong with their show. Aware of his impending death, Adamson’s devotion to the momentous photo shoot rises to an all-consuming panic while the others—increasingly disinterested in the photo while out of character, or even frightened of its prospects while in character—are nearly ready to miss the big picture altogether. Conversely, the other player without a dual role excels in her quadruple turn. Whether as a barmaid, stage star, or hypocritical temperance advocate from the photograph’s era or as her namesake twenty-first-century actress, Carolyn Shoemaker-Benjamin forcefully embodies the egotism and indignation which fuel the lust for immortality that drives this whole enterprise across the centuries. (Raymond Rehayem)