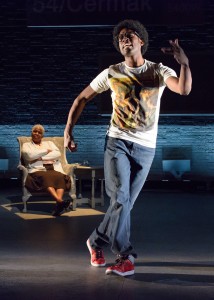 This play is rooted in the harsh reality of urban life in Chicago. It focuses on the stories of two mothers, their sons and the “village” it takes to raise their children, a village that has become a place of chaos, where “bullets don’t obey boundaries.”

Mary (Cheryl Lynn Bruce) is on stage—restlessly sitting in a chair—as the audience enters. White tables, chairs, a post box, basketball hoop and a 54/Cermak sign (like the one at the CTA stop) hang from the ceiling like a world turned upside down or dreams just a bit too far to reach. As the lights dim, a series of monologues serve as introductions to the people in Mary’s life and, one by one, it becomes more apparent why she can’t say a word: her memories have left her speechless and she is forced to awake to a cruel reality no parent should have to face.

The main plot is reminiscent of numerous accounts of homicides in the city. It is especially evocative of the murder of fifteen-year-old Hadiya Pendleton, who marched in Washington, D.C. for President Obama’s inauguration in January 2013 and was shot and killed later that month. Yet the subplot aims to explore the cause of the astronomical number of homicides that have made Chicago the murder capital of the United States. Gardley’s plot is carefully woven and the multi-role casting of the majority of the actors adds layers of complexity and authenticity as intrinsic as life itself. This is especially evident in Tosin Morohunfola’s brilliantly crafted main roles as Emmanuel and Noel, teenagers growing up in similar circumstances, striving to be successful, and risking everything to accomplish their aspirations and achieve the goals of their families.

The cast, directed by artistic director Chay Yew, is truly outstanding. No second is wasted. Even moments of silence carry incredible weight. Bruce again proves she is a force to be reckoned with on stage. She takes the audience on a rollercoaster of emotions, from unequivocal joy to heart-wrenching sorrow and everything in between. Ernest Perry Jr. (Joe/Coach/Others) and Jacqueline Williams (Martha/Mariam/Others), like Morohunfola, tackle each of their roles with tenacity, vigor and poise.

“The Gospel of Lovingkindness” is an ambitious prayer; one that pleads for a deeper appreciation for the value of life, as well as an end to violence and the circumstances that create it. While there is no one way to solve the problem of gun violence, Gardley, the cast and all involved, raise awareness of this pressing issue and provoke the audience to become a part of the solution. “There’s a light at the end of the tunnel,” proclaims Mary. “If you act, you will create great change.” Here’s hoping this prayer is joyfully answered. (Mary Kroeck)