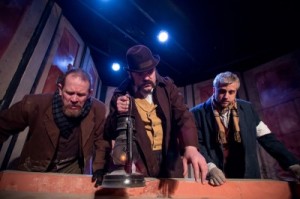 “Nothing is more dangerous than stupid men who think they have a good idea, ” says a character at one point. The play is based on the true account of a Chicago band of Irish-American crooks who tried to steal and ransom Abraham Lincoln’s body. A “roper”—the old name for an undercover agent—is employed by the Secret Service to infiltrate the counterfeiters who hang out at a neighborhood bar. It’s all immensely entertaining. Two hour-long acts are separated by an intermission.

Chicago veteran actor and playwright Will Dunne has turned this bizarre tale into an engaging, fun and at times moving theater experience. The witty script crackles as he captures the tough brogue of 1870s Irish Chicago. There’s a serious light-heartedness here, and a forward movement that draws you in.

Each character in the all-male cast is distinct. They all long to be important, to somehow raise themselves above the hand they’ve been dealt. The script probes questions of class, ethnicity and poverty in terms that still seem relevant today. Tony Bozzuto, who plays the roper, delivers a marathon quality performance; he’s in every scene. Michael Thomas Downey, as Mullen the bar owner-gang leader, provides added comedy and heat.

Though the Den Theatre’s space and resources are modest, the production feels big. The costumes and sets are scruffy and believable. The lighting and sound produce subtle effects. The evocative music lends a sense of history. That all these pieces come together so well—including brilliant acting all around—reflects the superb direction of Ron Wells.

A buffoonish, poignant climax occurs at the Springfield cemetery. When things spin out of control inside the coffin chamber, the roper exclaims “With Abraham Lincoln in the room, anything can happen!” Anything, it would seem, including the welcome appearance of an instant Chicago classic. (Mark Pohlad)