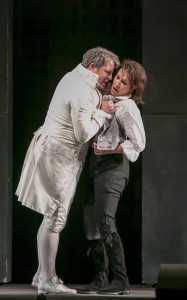 Mozart’s penultimate opera, “La clemenza di Tito” (“The Clemency of Titus”), is finally coming into its own. A work overflowing with the mature Mozart at his very best, “clemenza” was completed and premiered less than three months before his death at the height of his creative genius.

“The Magic Flute,” which was soon to follow, would become one of the most performed operas in the repertoire, but not “clemenza.” Like the “Requiem” that would also soon follow but which the composer left incomplete due to his sudden death at the age of thirty-five, “clemenza” is not 100 percent Mozart, but for a very different reason: Mozart took the work as a commission and farmed out the recitative sections to a student.  This, taken with the fact that the form of the work is the older, more serious and sterile opera seria meant that “clemenza” never quite found a place in the standard repertory the way other Mozart operas had, despite its many glorious musical moments.

The advent of a modern performing edition (the Neue Mozart-Ausgabe) and the efforts of the late French director Jean-Pierre Ponnelle began to restore the opera’s reputation. Indeed, it was not until 1989 that Lyric presented “clemenza” for the first time, and it has taken a quarter of a century for the work to make its return. Scottish director Sir David McVicar, whose imaginative new staging of Dvorak’s “Rusalka” is running in repertory with his version of “clemenza” that is being staged by his assistant Marie Lambert, has set out to streamline the action of the opera, which concerns an assassination plot against the Roman emperor Titus with ancillary relationships. McVicar has managed to remain true to the music while making a more cohesive narrative.

Making his role debut as Tito is tenor Matthew Polenzani and this is clearly going to become a signature role for him. Not only does the role lay perfectly for Polenzani but he is able to shade the emotions of the character with shifts in vocal color. Polenzani’s vocal agility is still not quite what it needs to be when vocal fireworks are called for, but his superb acting more than compensates.

Stealing every scene she is in, mezzo-soprano Joyce DiDonato, in the trouser role of Sesto, is compelling both vocally and dramatically. Her rendition of “Parto, parto,” with exquisite accompaniment from Lyric principal clarinetist Charlene Zimmerman, stops the show and is itself worth seeing this production to experience. Soprano Amanda Majeski as Vitellia has her moments, to be sure, but a troublesome quiver often makes her vocal flexibility a bit flabby.

Sir Andrew Davis, who was in the pit for Lyric’s first-ever “clemenza” in 1989—more than a decade before he would become Lyric’s longtime music director—returns and exudes his customary Mozartean charm. (Dennis Polkow)