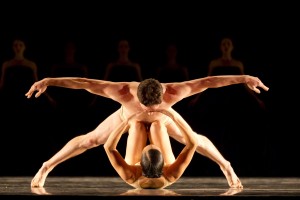 The opening moment of Jiri Kylian’s “Sarabande” is a mass birth. Six men fall from out of the bottom of six dresses to the floor, hovering on rounded backs like overturned turtles. After a moment, their limbs slam to the ground then lift again. Six mouths open and together issue a sustained and gut-felt yawp. Thus begins Kylian’s vision of the formation of self: playful and posturing, rigorous, but with a sense of abandon. The men in “Sarabande” grimace and giggle, holler and groan, pounding their bodies, creating the majority of the score themselves. The companion work for all women, “Falling Angels,” is a striking contrast: set to a drum phase piece by Steve Reich, it’s all angles and aggressive athleticism, patterned, sequential and controlled. Like much of Kylian’s work, these two dances delve into both the unexpected and the familiar: the piece about men centers on emotion, the one about women, on strength.

Before Hubbard Street began acquiring works by Jiri Kylian, you could not see the prolific Czech choreographer’s work without traveling to Holland or catching Nederlands Dans Theater on tour along the coasts. No American company had rights to his work and Chicago wasn’t yet a popular destination for international touring companies. Former Hubbard Street director Jim Vincent and current director Glenn Edgerton (former director of NDT) can be thanked for bringing Kylian’s brilliant choreography to stages across the country and now, for dedicating an entire program to his work. 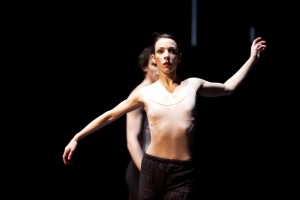 Four pieces comprise the evening, spanning more than twenty years of dance making. Two of the works—“Petite Mort” and “27’52”’—are longstanding Hubbard Street favorites; the aforementioned other two pieces were acquired specifically for this event. Repetiteur Roslyn Anderson has been working with Kylian since 1979 and came to set “Falling Angels” on the Hubbard Street women. When asked about the evolution of his work, she says, “We’ve been to hell and back—styles, approach, way of working. He gained confidence as his work developed. There was a more Romantic phase in the late seventies: more décor, more costumes. Now it’s stripped away.”

That reduced, focused aesthetic unifies four very different pieces on the Hubbard Street program. “Sarabande” and “Falling Angels” are part of Kylian’s Black and White Ballets: six dances with minimal costuming, where light and sound provide the context. “27’52”,” titled for the duration of the dance in minutes and seconds, employs the flooring itself as malleable set piece to stunning effect. Minimal stagecraft gives Kylian space to establish precise, yet abstract atmospheres; he is acutely honed in to the contemporary subconscious, and what he finds there is beautiful, erotic, eerie and quite often very funny. After all, the dance named after the French euphemism for orgasm opens with six men dressed in girdle-like briefs wielding foils. But what might first appear to be a wry joke evolves with the lush partnering that follows—extended classical lines spiced with unexpected shapes—into a deeper, more complex view of eroticism.

When asked why these four works, Edgerton gives a very practical answer: they’re easy to pack up and take on tour. If this is the case, the resultant program is a happy accident: unified, yet diverse in technique and moods—a marvelous ode to the range of both this company and the choreographer, as well as a seductive introduction to the work of a living master. (Sharon Hoyer)