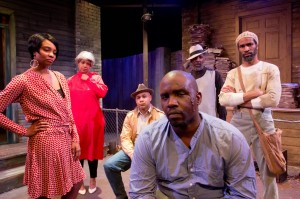 “Life’s got its own rhythm,” says Ruby (TaRon Patton). “It don’t always go along with your rhythm.” This is the continuous theme of August Wilson’s “King Hedley II,” directed by Daniel Bryant and presented by Congo Square Theatre Company.

It’s the 1980s in Pittsburgh’s Hill District. The local economy is in decline. Job prospects look bleak and the odds that stack against ex-con King Hedley II (Ron Conner) are as high as the stacks of newspapers in and outside of Stool Pigeon’s (Anthony Irons) house—floor to ceiling. When Aunt Ester dies at the ripe age of 366, everyone is sent into a tizzy. Wars are raged around every corner. Guns are shown off like prized possessions and toted around as casually as wallets. Human life can be taken as randomly as the toss of dice in a crap game, and it all too often is.

While Hedley’s wife, Tonya (Tiffany Addison), struggles with the decision of whether or not to keep their unborn child, Hedley and his friend, Mister (Marc Rogers), sell stolen refrigerators to save money to buy a video store and make an honest living for themselves.

The play picks up nearly forty years after Ruby and Stool Pigeon (also known as Canewell) are first introduced in Wilson’s “Seven Guitars.” Ruby, now mother to Hedley II, is still nursing the wounds of a murdered lover when she receives news that another gentleman caller from her past, Elmore (Trinity Murdock), seeks to woo her all over again. But where Elmore treads, Ruby’s tears are never far behind. Stool Pigeon has become the neighborhood street preacher and is determined to remember the world’s history and preserve it for future generations by saving the daily newspapers.

If you close your eyes, and just listen to the actors, you can hear the poetry of Wilson’s work. Each line is filled with purpose. Wilson’s characters tend to possess larger-than-life personalities, and this cast aims to successfully embody them. Conners’ rage can fill up the room, and often does. Irons is particularly magnetic and provides a balance to the production that is much needed. His portrayal of Stool Pigeon is as clever as it is ludicrous. However, the small stage and intimate space of the theater can overwhelmingly heighten the show’s moments of intensity and drain the room’s energy when things are slow. It also easily takes the audience out of the play when unintentional moments—such as delayed sound cues—occur.

For the limited space of the theater’s stage, Andrei Onegin’s set is cleverly designed to productively contribute to the play using every inch available. It is almost a character in its own right. The blue-green color of Hedley’s house imitates the seeds that he plants and hopes to grow; the broken chain-link fence can no longer keep troubles of the outside world out of the characters’ lives; and the elevated height of Stool Pigeon’s front door allows him to see the world from a different perspective.

The male interaction on stage tends to provide some comic relief as they offset the gravity of much of the male/female dialogue. Even so, most conversations are marked with remorse and question who’s really in control of life when everyone’s got their “hands in the soup and make the music play…” but “you can’t play in a chord God ain’t wrote.” The show leaves the audience with the reminder that not all history is preserved in newsprint, not every story is black and white and not all that’s dead and buried is truly gone and forgotten. (Mary Kroeck)