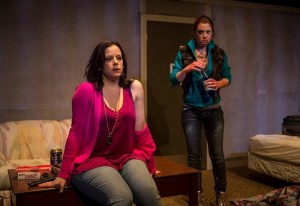 There is great truth in the notion that the insane do the same thing over and over again while expecting different results. Of the several themes in actor-cum-playwright Joshua Rollins’ play “Darlin’,” the parental fear of passing along to one’s progeny one’s suspected immutable defects appears in strong relief against a backdrop of familial neglect and its rancid first cousin, abuse. Some of the characters will call “halt” to the cycle, for better or for worse, while others will stay frozen in their personal winters. Who appears “crazier” to those of us who may sympathize, but aren’t equipped to empathize: those throwing their whole selves against the walls of their status quo, or those who sigh and sob, and stay put?

“Darlin’” is essentially a psychologically driven piece, a character study where the salient plot points—more delicious when they arrive because we’ve waited for them —shouldn’t be elucidated in this particular format without writing large at the top of the piece, “SPOILER ALERT!” Suffice it to say that the seven characters in Step Up Productions’ latest production find themselves thrown together, either by spur-of-the-moment choice or default, and learn about and from each other both willingly and unwillingly. Like siblings, they help (and lash out at) each other in almost equal proportion, defining and refining their own identities against their environment. The single act of the protagonist Clem (Clementine) checking into a small hotel in a smaller town creates a singular community. 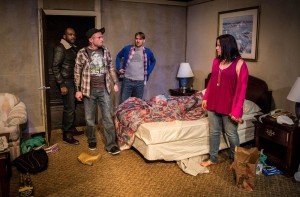 “Darlin’s” Clementine, delivered in a physically grounded, emotionally free-falling explosion by Elizabeth Birnkrant, is shown into a hotel room created by scenic designers Robert Groth and Jenniffer Thusing that is Best Western-esque from the carpet to the drapes by Todd Michael Kiech’s achingly etched hotel caretaker/mensch. Making the room her “home, right now,” redecorating extensively in crushed potato chips, empty cookie packages and bottles formerly containing various adult beverages, Clem is abetted by “everyman” Kenny, lit from within, and also from without (he delivers both groceries and pot), by Jake Carr. Robert Hardaway, Bradford R. Lund and John Wehrman turn in fantastic work. But it is the tour de force portrayal by artistic director Elizabeth Antonucci of Dee, the hotel’s housekeeper who can neither keep her own house nor Clem’s, that I cannot wipe from my emotional retina, not even with Brillo pads. Smart, feisty and funny, she beats tiny, steel wings against the cage of her circumstances, racing fearlessly to places we all hope we never have to travel.

As this is a Rollins premiere, it is hoped that he will continue work on this extremely promising piece. The writing seems to indicate a more farcical approach to the characterizations at its beginning, presenting resonant, comic archetypes that leave the audience in a mild state of sedation before the roller-coaster ride begins; this device could be used more fully. The first act could use some slight trimming, in contrast to the second act, stunning in its drive to a finely constructed finish. Rollins meets head-on the challenge of multiple themes for seven characters “in the same room;” however, the character of Smith feels underwritten. Kiech does a marvelous job in creating the character arch which could profit by more flesh in the text.

It is easy to see why this play would ignite the interest of Step Up, as their mission statement clearly places their self-understanding in the context of their larger city-community. A portion of the proceeds from Step Up’s productions are gifted to another nonprofit Chicago organization, and as domestic violence is a theme in “Darlin’,” this production’s outreach is to House of the Good Shepherd, which provides safe space and other support to women and children affected by abuse. (Aaron Hunt)