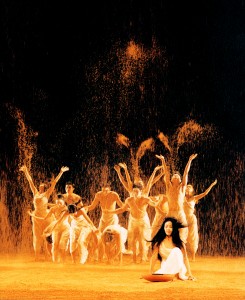 The Buddha stands in meditation showered by a thin stream of golden rice. Around him the panoply of human emotion, struggle and folly plays out in dream time while the mound of rice grows at his feet. The haunting figures which animate Cloud Gate director Lin Hwai-min’s vision of nirvana sought and found move with a power beyond muscle, tendon and bone; they are dancers of wind and water, controlled not by mind, but by sheer life force. The landscape they wander at the speed of growing vines is vast and shifts with the drifts of rice to create a scene as ornamentally spare and energetically abundant as the movements of the performers themselves. And when the moment of enlightenment comes, it electrifies the room with a thunderclap of voices and fireworks of joy. (Sharon Hoyer)