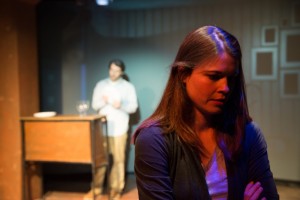 There are damned good reasons why the gods granted Odysseus stormy seas and all-around tsuris, and why centuries later Dante would place him in the eighth circle of hell. Odysseus’s torment isn’t a guilt complex—it’s karma for all the suffering inflicted by this Bronze Age sociopath.

Which brings us to InFusion Theatre Company’s Midwest premiere of Andrea Stolowitz’s well-intentioned, well-executed but misguided play about the travails of a soldier coming home from her tour of duty in Afghanistan. Ex-marine Lanie (played with brittle, scarred intensity by Meredith Rae Lyons) just cannot settle down as though nothing has happened. Accompanied by her battlefield comrade Evie (played by the terrific AnJi White), Lanie heads off on a spontaneous pilgrimage to bury her ghosts and maybe find some hint of forgiveness.

But forgiveness for what? Lanie is haunted by a wartime incident where she failed to pull the trigger during a confrontation with an Afghan boy—which is to say, she wasn’t murderous enough. The questions of why the youth did what he did, or why Lanie was in Afghanistan at all, are not touched upon. In the end, “Ithaka” is no more critical of war than is the Iliad, treating it more like a natural disaster than a political choice. The play’s refusal to contextualize Lanie’s PTSD ends up trivializing her spiritual injury.

Burdened with an ungainly, conceptually flawed script, Director Mitch Golob manages to keep things moving, and creates some fine theatrical moments of surprise and revelation. The performers—including Nick Freed as Lanie’s husband and Tinsey Rose as Evie’s mother—struggle nobly to give dimension to pancake characters. The hero of the project is video designer Liviu Pasare, whose series of ingenious back-projected panoramas turn the modest Chopin Theatre space into a boundless desert vista.

But when the background scrim is the star, something isn’t right. What’s potentially most relevant about “Ithaka” is its gender reversal, as the woman—historical embodiment of the home front—becomes the returning warrior, incapable of transitioning back to normalcy and domesticity. However, Lanie never comes fully alive, and her tale, which aspires to the epic and mythic, settles for conventional psychodrama. (Hugh Iglarsh)