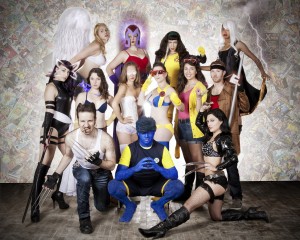 Back in the cathode ray days of my pre-HD childhood, when my father bemoaned my obscure taste in comic books (“What are the X-Men? Why can’t you like something popular like Spider-Man, so I can buy you something?!?”) it wasn’t just uncool to have geeky tastes, it was downright inconvenient. Miss an issue of mutant boarding school mayhem and you had better pedal your ten-speed to your only local comic shop (if you were in so fortunate a locale) and pray on the way that there will be a bagged back issue to fill the gaps in your knowledge of Homo Superior developments.

It’s a vastly altered reality in which the Chicago Nerd Comedy Festival (aka Nerdfest) gears up for its second annual undertaking this month at Stage 773. I credit the MP3 for making handheld gadgetry irresistible and CGI for making big screen superheroes passable. Regardless, nowadays there’s nothing mysterious about an old Green Lantern t-shirt. It’s quite the opposite.

“Nerd is kinda norm now,” opines Nerdfest co-creator Katie Johnston-Smith. A self-identified nerd who temporarily abandoned the fold due to middle school mockery, she confesses to a concern that returning to nerd-dom around the time it rose in stature may make her “a poseur.” But Johnston-Smith’s enthusiasm for geek culture proves the authenticity of her allegiance. Following last year’s inaugural success, the festival’s committee came up with a free monthly night of fan fiction readings to sustain and build interest leading up to this year’s Nerdfest. Johnston-Smith and co-founder Fin Coe curate and host “Hey, I’m A Big Fan: A Night Of Fan Fiction Readings” every third Wednesday at Stage 773, for which participants specifically write new material. Much, though not all, of the fan fiction is erotic in nature. Despite seemingly intense prospects like “a very graphic sexual version” of the sitcom “Full House,” Johnston-Smith describes the ongoing monthly series as “low stakes and chill.” A selection of the best “Hey, I’m A Big Fan” readings—as chosen by the festival committee and the fanbase—opens the festival on Wednesday.

Like last May’s debut Nerdfest, this month’s edition features all local talent. Beyond a full program of comedy, musical and improv performers, Johnston-Smith is particularly excited about the free events that close each of the final three nights. For Thursday the special offering will be “The Nerdologues Presents Your Stories: Chicago Nerd First Edition.” According to Nerdologues “Founder Extraordinaire” Kevin Reader, soon after their formation four years ago this troupe of Chicago transplants found their best work focused on their personal experience of the world from a nerd perspective. Their shows have evolved to include a musical performance along with the personal stories.

Each third Sunday at Public House Theatre, “Your Stories” present Nerdologues members and audience invitees sharing their tales, sketches, stand-up and songs. The night is later posted online as a podcast. A pair of Nerdologuists will host this “Nerd First” Nerdfest edition, starting the event with stories and songs and then welcoming a couple of their cohorts before turning the spotlight over to some fellow Nerdfest participants. Friday’s free aftershow event provides a night of table games while Saturday’s complimentary competitive cosplay closeout takes place in the fictional universes of Joss Whedon. 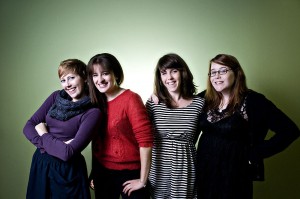 Like Johnston-Smith, Reader speaks of the welcoming nature of the work. “Even though the festival may be niche, it shouldn’t scare people away,” says Johnston-Smith. “The nerd community is accepting, especially the Chicago nerd community.” Even to non-nerds? “Yes, we want to bring people along for the ride.” Reader adds “Chicago is a magical place for comedians in general, a mecca to learn the craft.” When I suggest perhaps comedy is in general a nerdy endeavor, Reader tentatively concurs, explaining nerdiness and comedy both operate on a base level of social awkwardness—though he’s quick to add he doesn’t want to paint comics and nerds as social outcasts and that indeed The Nerdologues fight against such stereotypes.

Unlike a lot of comedy, while The Nerdologues surely poke fun at things they and their audience love, Reader says they aim to “Bring people up, not put people down.” He summarizes their mission statement as “1. Bring Nerds together 2. Make Nerds laugh” but he explains “I think that can be broadened from “Nerds” to “people.”  Note the capital “N” the Nerdologues use in the originally pejorative term for those who share their geek/pop culture interest. “It’s a badge of honor for some; for others there’s some rage with being a Nerd.” I wonder if there are any non-nerds left in this geeky epoch. Reader explains The Nerdologue shows are for these rare non-nerds and Nerds alike. “There are plenty of [other] people to write jokes about the newest Batman movie. We are more about catharsis than culture. We are still storytellers and try to find the human qualities even if the references don’t mean much or mean anything. The references are there for the superfan.”

Stella Cheeks of Plan 9 Burlesque, who close out the festival on Saturday night, speaks of the same drive for universal appeal. The troupe is not concerned “if the audience doesn’t get a specific reference, but that the number is compelling enough even if you don’t get the references. It’s about experience in the moment.” As Cheeks is aware, “Nerdiness right now is super marketable. Burlesque and being a nerd are both popular right now in a good and a negative way. It’s really liberating personally—specifically for a company of genuine nerds not just cashing in on nerd culture.”

They’re passionate about both nerd culture and burlesque. At their monthly Public House Theatre shows they work hard to extend that enthusiasm to the audience onstage and off—with a pre-show party, raffles at intermission, and discussions afterwards. These shows, every fourth Sunday of the month, are themed and often extend beyond Pop Culture to touch on such loftier nerdy endeavors as science and history. For their Nerdfest finale, Plan 9 is presenting the best of their pop-culture-based numbers, without repeating any vignettes from last year’s festival. Subjects will include convention staples like Scooby Doo, BioShock and Star Trek. 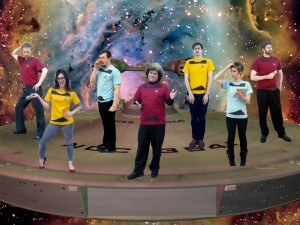 Star Trek inevitably factors elsewhere in the Nerdfest, specifically in Friday night’s popular “Improvised Star Trek” from iO Chicago. “Improvised Star Trek” follows a showcase of stand-up comedians and precedes with other geekishly tempting improvs about Dr. Who and about the mighty Thor. A “nerdy cabaret,” a comically unqualified abridged overview of Stephen Hawking’s most famous work, an iO-spawned ladies ensemble that goes by MRS., and the sketch and musical comedy of Clown Car To Sicily And Matt Griffo provide Thursday’s program. On Saturday the participatory dodgeball of Planetary Defense Force, the often musical sketch comedy of festival co-founder Fin Coe’s Pretty/Windy (with puppets), a Jane Austen improv, the comedy duo of Urlakis and Cusick, and a structured sketch show from the Nerdologues lead up to the Plan 9 climax.

You may not be a Trekkie or know the color of Abin Sur’s skin, but Johnston-Smith and Reader theorize that at its root nerdiness is near-universal. “There’s always something people like enough to find commonality in their interest, so that’s what we try to do as creators.” The Nerdologue’s tagline about the nature of nerdom is “It’s not what you like, it’s how you like it.” Similarly, Johnston-Smith proposes “You can pretty much be a nerd about anything.” Her assurance to nerdy persons considering a visit to Nerdfest? “They will feel a positive, electric energy like they feel at ‘Hey, I’m A Fan.’ There’s a sense of camaraderie, community, fitting in.”

On fitting into the nerd community, Cheeks reflects “We have a lot of experience dealing with nerdiness in different ways.” The company, along with their fanbase, includes younger-generation nerds who were growing up while nerdiness was moving toward acceptance as well as older-school nerds who lived through nerddom’s more clandestine days. “It’s a coming-together point, which is a lot of what happens in nerd culture—finding common interests.” Speaking to these common interests, Stella implores her fellow nerds considering the weekend’s roster to give Plan 9 a shot. “In a Nerdfest of sketch and improv we’re a bit of an outlier, but don’t discount us. We’re still very funny and nerdy. And we get naked—there’s the bonus of that!”

In some performances, that “bonus” is unveiled as the burlesque performers peel themselves out from the colorful garb of those Uncanny X-Men. If Plan 9 had been around in my young,  grey days as a comic-book nerd, my dad’s shock at my taste in superheroes wouldn’t have been about the relative obscurity of my interests. Rather, he would have marveled at the then-ridiculed-but-now-mainstream intermingling of originally youth-targeted pop culture and adult sensibilities which helps make a Nerd Comedy Fest a potential big city hit.