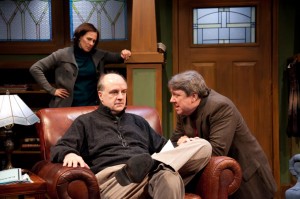 Napoleon once said, “What is history, but a fable agreed upon?” We can never really know what the “truth” is where history’s concerned; maybe it’s just a fanciful strip of terrain over which passionate battles are fought. The discipline is full of practitioners who fudge historic record for their own aggrandizement. But when historians pad their own biographies, does that damage their credibility? Given the shifting and shifty nature of history, should we care if individuals play fast and loose with their personal truth?

History professor Douglas Graham (an affable, passionate Mick Weber) is coming into his own; he receives awards and the best academic programs court him. He and his devoted wife Lanie (Cheryl Graeff) garner favorable media coverage from their former academic protégée Peter (Jordan Brodess). Subsequently, Peter discovers Douglas’ personal story doesn’t match up with history. How, he rationalizes, can we trust a historian who takes liberties with his own truth?

Playwright Christina Gorman’s premise is flawed; someone’s personal ethical lapses shouldn’t automatically affect his professional work, not when his scholarship can be corroborated. Furthermore, Gorman fails to indicate why a talented scholar would need to lie about himself; that information would make for an electrifying monologue. Flaws aside, Gorman’s dialogue crackles with humor and passion; she makes Douglas a great storyteller as well as a historian. Weber clearly relishes his monologues and makes the history he relates palpable. Brodess and Graeff nail their characters’ conflict over Douglas’ transgressions. Brodess also effectively handles Peter’s reticence and guilt over the national publicity his subsequent exposé brings.

Director Steve Scott is sensitive to the shifting emotions that run throughout the piece and guides the pacing with a deft touch. Grant Sabin’s warm, Prairie-influenced set is the perfect home base for those enveloped by and burdened with history.  Both the room and the piece remind us that the past is all around; we will never be free of it. (Lisa Buscani)