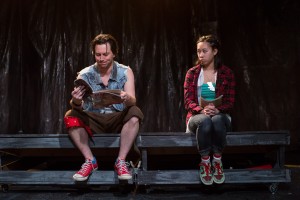 The teen besties of “Ghost Bike” face a fearsome transition: Ora (Aurora Adachi-Winter) is bound for college out of state, while her pal Eddie (Ricky Staffieri) is remaining in the town of Chicago—every corner of which they have fallen in love with during their nonstop cycling. Yet it turns out Eddie is the one who departs first, and forever, dying in a cycling accident after the pair have an Independence Day falling out over their differing plans.

Ora, as in Orpheus, at first isn’t able and then isn’t willing to accept the permanence of Eddie’s passing and—following some advice from a wackily disturbed fellow patient of her creepy and glib psychiatrist—our heroine embarks on a journey (real or imagined) through a cross-culturally mashed up mythological underworld to bring her dead cycling partner back to the land of the living. In addition to the fanciful, powerful, less than accommodating denizens of the afterlife who she must outwit, Ora finds herself trying to persuade her belated chum of the value of her mission; she eventually resorts to the sort of trickery Orpheus suspects of Hades. For the twist here is that Eddie is no willing Eurydice; this recent arrival to the realm of spirits is not interested in returning to life.

The young cast is engaging and easily delivers this blending of timeless, universal myth with contemporary language and situations. The impressive ever-changing sets, use of projection and comical makeup both distinguish between the shifting realities and draw parallels between the neighborhoods of Chicago which Ora and Eddie romp through in life and the neighborhoods of the dead which Ora traverses, hellbent on reviving Eddie. Ora’s encounters with the inhabitants of the afterlife are downright enjoyable and overall more convincing than her interactions on Earth. Though the emotional pull lacks gravity, at least the show never turns maudlin. What is least interesting about the whole production is the motivating factor behind it all: the friendship of Ora and Eddie. I was never nearly sold on Eddie being worth all Ora’s supernatural trouble. (Raymond Rehayem)