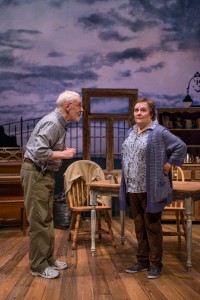 Chapatti, an unleavened flatbread, is a staple of South Asian cuisine. Chapatti is also the name bestowed upon the beloved dog of Dan (John Mahoney), the male half of the two-hander in playwright Christian O’Reilly’s play of the same name. Developed through Northlight’s Interplay, a program designed to encourage new authors, this world premiere is co-produced by Galway Arts Festival in Ireland, where three other premieres cultivated through Interplay have travelled to great acclaim. Dan’s female anti-muse, Betty (Penny Slusher), has perhaps nineteen cats, although the counting is sketchy as there is a new litter of kittens on hand, and Betty mentions that there are always more on the way. What is the likely result of an opinionated dog and a houseful of strong-minded cats being tossed together, however inadvertently, by their owners? The word “mayhem” springs to mind.

Certainly the meeting of the unlikely pair appears less than fortuitous; what could be more instantly riotous than an impromptu party for an unleashed pup and a crate of escaping kittens held on the veterinarian’s front stoop? Dan has lost his love, and Betty has all but given up on Cupid. Dan growls and grumbles, and Betty demurs and giggles, both hiding their loneliness, focusing on the care of their animal friends. Can they pull the bricked-up facades down and start anew, even at a less-than tender age?

That Mahoney is an international treasure is an understatement. His years as Marty Crane on the ever-popular television show “Frasier” cemented him into the general consciousness. In Chicago we are especially snooty about claiming Mahoney for our own, as he now resides in our metropolis and continues his acting career primarily onstage, treading the boards of Steppenwolf and Northlight Theatres. He has perfected the character of the elegant curmudgeon; his harumphs and noisy throat-clearings making ballet music, his twinkling eyes dancingly admitting the subterfuge. As Dan, Mahoney mixes the angrily tight-lipped edge of his performance with a melancholy kindness.

A character actress possessed of coast-to-coast range, Slusher’s ability to portray an anvil-spirit wrapped in emotional gossamer has endeared her to Chicago audiences; never mind that she arrived via Tennessee. Slusher leads an audience like a pied piper into an intimate friendship with her characters. We laugh and cry with her, and reach for the teapot when the cups need refilling. Slusher’s work makes the fourth wall completely transparent, and her Betty is another jewel in her well-deserved crown.

In a theatrical season full of character-driven offerings, where the audience’s investment in the characters is paramount, Director BJ Jones’ production never misfires. Take a hanky and a best friend, and get to Skokie straightaway, before Mahoney and Slusher get on that plane for Ireland. (Aaron Hunt)