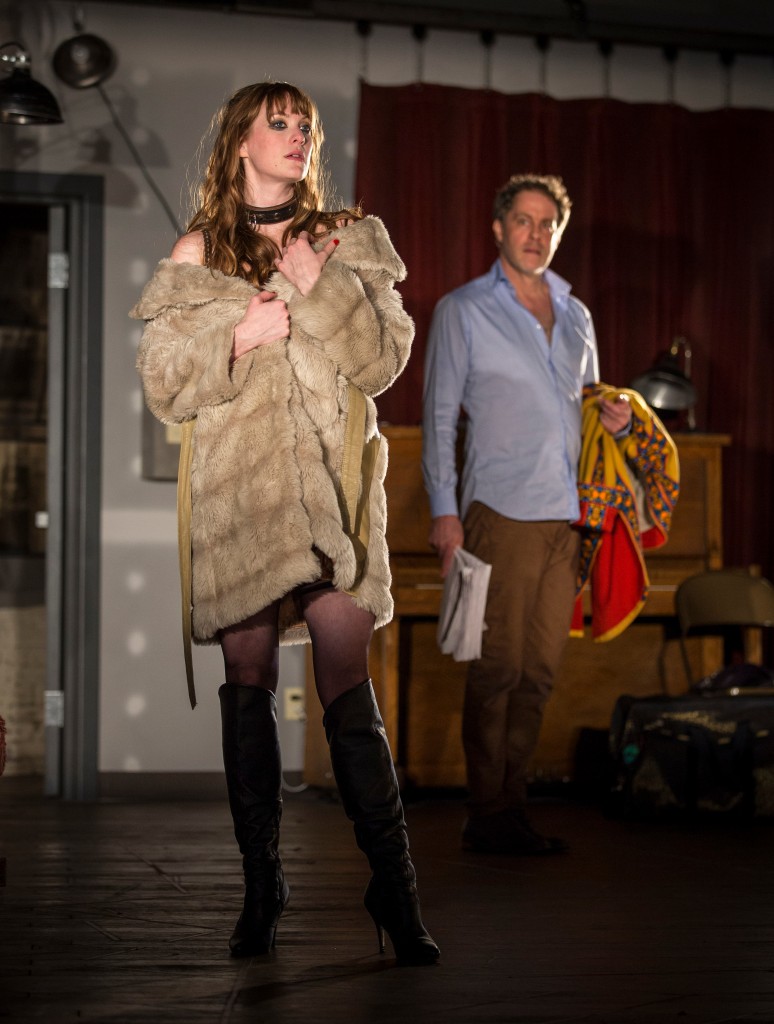 Playwright David Ives has made his reputation with smart translation-adaptations of classic French works, most recently his retooling of Moliere’s “The Misanthrope” as “The School For Lies,” which played at Chicago Shakespeare Theater in 2012. That one of the two characters in his latest work, Thomas, is adapting Leopold von Sacher-Masoch’s scandalous mid-nineteenth-century novel, “Venus in Furs,” and goes to great lengths to clarify, in conversations with the other character, Vanda, the difference between author and adaptor, which eventually raises questions about why did Thomas (and by extension Ives?), in fact, choose this particular novel—a work that literally gave masochism its name—makes the authorship here all the more interesting.

But you don’t need to know any of this to enjoy the production at the Goodman Theatre. A clever twist on the old play within a play, this brisk and entertaining two-hander manages to pack complexity of structure and big ideas into ninety-seven uninterrupted minutes. A seemingly clueless ditz of a young actress shows up insanely late to audition for a low-budget production of a new play based on a Victorian erotic novella, “Venus in Furs.” Unrelenting, she convinces the adaptor, the only person left in the rehearsal room from a day of unproductive auditions, to read with her. Like any good actor, she transforms with a script in her hands, in this case into a sophisticated and eloquent seductress and, before long, the characters on stage are becoming the characters on the page, as “real life” in the rehearsal room merges into the imagined life of the play.

This might be Ives’ most accomplished work yet: in adapting “Venus in Furs” this way, as an interactive audition, the playwright crafts an explicit and layered dialogue on the work’s message. Is the novella a nuanced reading of a very complex romantic relationship? Or is the masochist played by Thomas just a misogynist, hiding behind sexual deviancy as a cloak for a traditional male domination story?

Goodman’s production crackles with the freshness and intelligence of the work, and of the creative team behind this production. Joanie Schultz is a rising star in Chicago’s freelance directorial ranks, but not one of the regulars in this space—yet. Amanda Drinkall is still a relatively new face in Chicago theater; she nails this complicated and critical role with finesse. Her Vanda moves fluidly in and out of “character”: one minute she’s all Victorian elegance and then here comes an “aw-shucks” interjection, her meta-comments increasingly loaded with more substance than their delivery suggests. New York actor Rufus Collins, as the middle-aged playwright, inhabits fully the role of a man clearly hiding a host of existential issues that surface with just a little prod. Only the sturdy scenic designer Todd Rosenthal, whose simple set looks like, well a perfect replica of a spartan rehearsal space, is a regular within these walls.

It’s lost on no one that a certain bestselling book, widely panned for its poor prose, has created a certain renewed public interest in S&M; are we in the age of cultural commodification of the “deviant”? In sharp contrast, Ives work, with his deft use of language, does not allow for simple armchair voyeurism. “Venus in Fur” traffics in the sensuality of words themselves and, in doing so, accomplishes the seduction of an audience. (Brian Hieggelke)