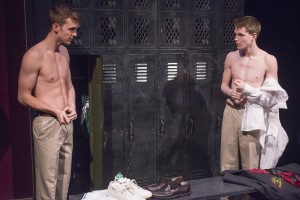 Will Kiley and Derek Herman

When does “innocence” evaporate? When does “inheritance” jump the financial ledger and land onto the behavioral spreadsheet? And how much weight can we grant the still-gestating psychological investigation of “sociopathy, ” positing social factors and early environmental structures as begetting progeny who can turn empathy from involuntary function to the voluntary, brandishing both callousness and charm as fits the purpose? Who must own the responsibility? Where does the buck stop?

Such questions pepper Raven Theatre’s production of “Good Boys and True,” a character-driven study of the ways in which absent parenting and irresponsible socialization can affect a child, and in turn, a larger community. Although playwright Roberto Aguirre-Sacasa draws from his own high-school experience in the 1980s, there is no lack of resonance today. As the American middle class shrinks in size, the divide between the privileged and the impoverished show the splintering of the “American Dream” in sharp relief. The depersonalization of an entire segment of society follows easily on the heels of disproportionate largess. At the core of this drama is a mother (Maggie Cain) and son (Will Kiley) struggling for psycho-social equilibrium. Will the sins of the parents be irrevocably visited upon the children?

Aguirre-Sacasa creates the illusion of plotting in a tale that has already happened before the actors enter the theater-in-the-rectangle, black box space, keeping the audience in suspense until the final scene. Director Cody Estle, a Raven ensemble member, guides the cast of six to fully fleshed characterizations. Estle, a favorite director at Raven who will helm their May/June production of Tennessee Williams’ “Vieux Carré,” keeps the ensemble seated just outside the playing area, watching the action, engaged but unobtrusive; this is no small feat. The homo-social interaction between son Brandon and classmate Justin (Derek Herman) is erotic without being exploitative; reviews of previous productions focus on this relationship as central, but Estle directs it as causative, as is appropriate to the writing.

Which is not to say that Kiley and Herman fail to provide eye-candy, and the locker room scenes ratchet up the tension. Kiley gives a beautifully drawn portrait of a handsome young man who wields his studied charisma like a machete. Herman’s Justin drips adoration until blinders slip away and he regains himself. As the football coach, Karl Potthoff craftily keeps the audience guessing as to his private agenda, and Sophia Menendian portrays a quiet spitfire who will never be anyone’s victim. Ensemble member and executive director Kelli Strickland’s sister/aunt provides both the moral center of the play and the comic relief. In lesser hands this challenge could be easily bungled, but Strickland layers it so naturally that it is difficult to believe that Aguirre-Sacasa didn’t write it for her. (Aaron Hunt)