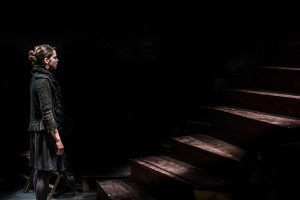 “The Killing of Michael X” is that rare piece of art; a complex, genre-evasive production that keeps the viewer off balance for almost its entirety before ultimately delivering on all its potential (and then some) in the closing scenes. Part classic film noir, part meditation on grief, playwright Cory Hinkle borrows from a multitude of sources to create a unique take on sorrow as well as America itself in the post 9-11 world.

Joanne Dubach stars here as Celia, a movie-obsessed teenager whose older brother committed suicide a few years past. In search of vengeance, Celia uses the promise of sex to recruit her homeless friend Randy (the well-cast Andrew Goetten) into helping her create a movie/possible documentary detailing the killing of Michael X (a one-percenter blamed for everything from her brother’s suicide to the Iraq war). Whether this pursuit is real or an elaborate fantasy is mostly left unclear until the very end of the play. Adding to the intrigue is the possible resurrection of Celia’s brother, a found human femur, parents literally lost in a white fog and a detective (Jared Fernley who does well as a brooding detective but truly shines in his role as a radio announcer prone to hyperbole) grieving a daughter with more than a passing resemblance to Celia.

Director Kaiser Ahmed’s liberal use of film (projected beautifully on movable screens) illuminates well the plastic, often viscerally appreciated ordinary American life.  At times the movie within a play format can be quite confusing, but this is clearly by design and sets up well the more emotionally satisfying conclusion. Accompanying the visual effects is Thomas Dixon’s ominous sound design and original music that help to create a foreboding feel to the entire production.

The stage here is open and vast, but for the more tender moments Ahmed places the characters on a simple staircase set amongst the theater seats and leading to a symbolically closed door.  When the talented Dubach stands just a few inches away from the audience to express her grief, the theatrical world constricts and the sorrow that she emotes is palpable. It is in these moments that the play rises above art school project and become something much, much more. (Noel Schecter)