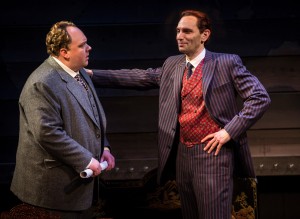 In “Road Show,” now playing at Chicago Shakespeare Theater, Stephen Sondheim and John Weidman compress the story of minor American legends Wilson and Addison Mizner into a peripatetic fable. The Mizners lived big, meandering and literally beguiling lives. They crossed paths with, or just crossed, many notable Americans as they made their way. The real Wilson, a Promethean con man, first sought his fortune in Alaska, where he helped create Nome with a saloon and crooked card table. Between 1910 and 1933, he worked both on Broadway and in Hollywood, where he co-wrote sexualized dramas about ambition and cons. When streetcar magnate Charles T. Yerkes died, Wilson married his widow Mary Adelaide Moore Yerkes and moved into her 5th Avenue mansion, selling forgeries of her masters paintings. Wilson had a Johnsonian knack for quips. He presumably was the first to utter “Be nice to people on your way up because you’ll meet the same people on your way down.” Wilson eventually sued the former Mrs. Yerkes for divorce. When his attorney reportedly asked his reasons, Wilson asked “Isn’t marriage enough?”

Addison had a similarly peripatetic streak. After several failures, he landed in Palm Beach, Florida. A self-taught architect, he ingratiated himself to the ultra-rich with fanciful designs for mansions inspired by exotic Hollywood spectacles. Eventually, the brothers joined forces and created Boca Raton, planned as a Venice in the Americas and sold to investors like patent medicine. Not only did the Mizners invent communities, they helped conjure up the boom-and-bust cycle in Florida real estate.

Even the greatest creators of musicals struggle when they take on big meandering lives, especially when they cross with titans and historic episodes. Shows that tackle the biggest, most wandering narratives can fail their way up to brilliance. Sometimes it takes decades and dozens of productions. The often rewritten “Show Boat” and “Candide” (to which Sondheim, among many, once contributed) show why. Even when the songs soar and lyrics move and amuse, the books of big-story shows matter. And they’re hard to wrangle into a couple of hours. They must be cut and reordered, sometimes over generations. 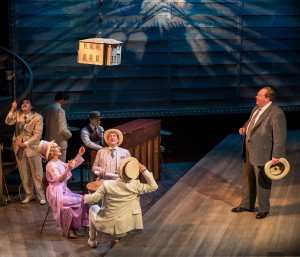 In this current production of “Road Show,” long loving dedication to a onetime flop shows how endurance can pay off. The core material has been seen before in less coherent outings, called “Gold” and “Wise Guys” and “Bounce.” Now it comes pared to around ninety minutes with no intermission, with the fascinating facts of the Mizners’ lives loosely reordered, reinvented and more aggressively trimmed. The core of the show is the tortured, entwined relationship between Wilson and Addison, now both types—one a conniving, willful seducer of women, the other a tentative, sensitive gay aesthete—who fuse into an amoral team. The pair still travel the world.

Sondheim provides a highly entertaining set of ballads and novelty songs. We get the trademark reprises that magically turn the meaning of the texts upside down. Director Gary Griffin again proves his mastery with a spare set, giving the performers most of what they need to fill this continental journey from inside the script, the score and the strident energy with which the cast moves. One greedy lament is that there is not more dance.

Helping out is a vocally glorious cast that sells every song as persuasively as the Mizners would. The angular Andrew Rothenberg imbues Wilson with a deliciously sleazy magnetism. Michael Aaron Lindner creates a complex Addison who is almost solely responsible for the emotional turns that propel the show forward. Most of the cast fills multiple roles. Some are wandering musicians. They both inhabit the stage and grace the air with Michael Mahler’s lovely orchestration (and underscoring) that gives poignancy even to the showiest numbers. “Road Show”’s troubled past, and obscurity, make it a musical that Sondheim fans will strive to see but others may overlook. The production on stage now, however, is one everyone should buy into. (Ted C. Fishman)