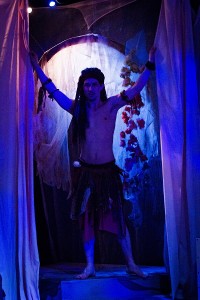 Yes, yet another production of Shakespeare’s anarcho-pagan comedy that dares to ask the question: Is there anything less romantic than patriarchy, religion and capitalism—i.e., the forces that structure society? In a system that translates human relations into property relations and that sees sexuality more as a problem to be managed than a gift to savor, it’s a wonder that the species finds the will to keep itself going. Sometimes it takes a little supernatural assistance.

As “Dream” begins, Hermia (Diana Coates) is being guilt-tripped by her father (David W.M. Kelch) for her unwillingness to marry his choice, Demetrius (Jake Jones), because she prefers Lysander (Elliot Baker). Judging the case is Duke Theseus of Athens (Michael Saubert, Jr.), who declares that she must either obey dad or face death or the nunnery. Hermia points out that Demetrius has been seen running around with Helena (Deborah Craft), who remains madly in love with him. But the law is the law, says Theseus. He is not in a compromising mood, as he has just conquered the Amazon queen Hippolyta, and seeks to transform his fiercely feminist war booty into a loving and devoted little wifey.

The ongoing tragedy of male and class privilege can only be made comic by returning to nature and simplicity, in the form of fairy king and queen Oberon (David Weber) and Titania (Vanessa Hughes), and a passel of rustic but earnest commoners, rehearsing a nuptial play for the royal couple. Over the course of one wild night, all the stories come together in a hallucinogenic tableau of romance, rivalry and magical transformation. All is guided by the impish, chaos-making hand of Puck (Jude Hansen), the playwright’s stand-in, who creates and resolves conflict and complication with the potent fairy-dust of art.

Piccolo Theatre faces the challenge of staging a play so over-familiar that we no longer notice just how subversive it really is. Director Jason Martin succeeds in giving the old warhorse a healthy dose of youthful energy, presenting a tuneful, acrobatic fairy’s-eye view of what fools these mortals be. Hansen’s Puck vibrates with prankish, quicksilver energy. His fellow fairies—often played by little girls in tutus—are here portrayed by full-grown men and women, a refreshing choice for a work that can easily collapse into cutesy. (And Joshua Allard’s fairy costumes—hinting of Aztec and Druid—are inspired.) But it is Deborah Craft’s Helena that shines brightest. Craft’s timing, expressiveness and ability to mingle pathos and humor mark her as a comedienne to watch.

This “Dream” isn’t perfect, but it is a charming and intelligent production by a company of limited resources and copious imagination. The lovers’ escapade among the sprites and hobgoblins brings not just them but us too back into balance with nature, restoring joy and spontaneity to a tired, over-ordered and coercive world. (Hugh Iglarsh)