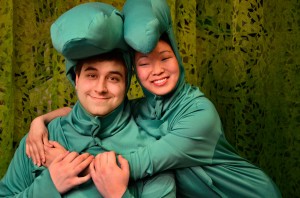 If the best way to determine the success of a children’s play is by the quiet smiling faces of its audience, then Lifeline Theatre’s performance of “Lyle Finds His Mother” hits its mark. A story of a domesticated crocodile in search of his wild crocodile mother provides a sensitive lens with which to explore adopted family dynamics. Director Dorothy Milne and playwright Jessica Wright Buha, in her debut adaption for the company, transform Bernard Waber’s somewhat plodding 1974 book into a singing, dancing, juggling, hula-hooping, jump-roping, gymnastic showcase for five dynamic performers.

Speaking only squeaky crocodile, with the occasional English soliloquy, Anthony Kayer’s Lyle, in his frumpy green crocodile costume, is probably enough to keep most children’s eyes glued to the stage. Lyle’s best friend Josh (Brian Tochterman Jr.) is the perfect id-free eight-year-old whose broad, gangly movements welcome the actual eight-year-olds into the world of the stage. Strong performances by Linsey Falls, Deanna Myers and Erin O’Shea provide the movement of the plot and highlight the more poignant aspects of this progressive children’s book.

There’s more than enough humor to keep the laughs rolling, but not at the expense of the more subtle, emotional aspects of the story. Particularly moving is a late scene in which the two mothers come face to face and realize their shared experience of loving their crocodile son. While this moment lingers, it is saved from sappiness by the highly animated Falls and his mad dash between characters up to the final curtain. With a brisk one-hour running time, my three-year-old only broke his concentration to ask when Lyle would be back on stage. (Nora Durkin)