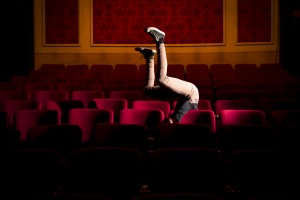 Lizzie Leopold announced this to be a year of collaboration, starting in January with a collection of short works by Chicago-based artists entitled “Archipelago.” This next shared program pairs The Leopold Group with The Space Movement Project in an evening that asks the viewer to consider their own spectatorship. A portion of the audience will be seated on the Ruth Page Center stage, split into two groups facing one another. The Space Movement Project will perform “The Dismantlers,” a look at natural elements in manmade environments. The Leopold Group brings a restaging of “Lips of Their Fingers,” a dance about dance and very much in keeping with the theme of the evening. “Lips” opens with garish stagecraft elements like Christmas lights and Astroturf—Leopold describes the aesthetic as “bad Italian restaurant”—which are gradually stripped away to reveal a blank slate for movement and engagement with the audience. The two companies hope that reflection on the common act of spectatorship unifies their work. Leopold says, “watching is such an important and ubiquitous part of dance and we rarely look at it, because we are so busy looking at the dance. But the act of watching is not neutral and we are hoping to highlight its complexity and complicity in this performance.” (Sharon Hoyer)

The Space Movement Project and The Leopold Group at the Ruth Page Center for the Arts, 1016 North Dearborn. March 28-30. Friday and Saturday at 7:30pm, Sunday at 3pm. $20-$30. Tickets available at brownpapertickets.com.