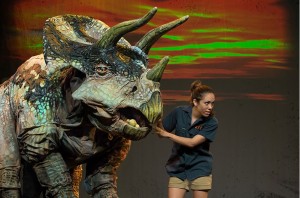 Adults with kids:
“Dinosaur Zoo” is an interactive puppet show about dinosaurs in the same way that a Hummer limousine is a car. It’s really fun, it’s bigger than normal and experiencing it once for about an hour is probably enough for anybody.

The hour spent at the Broadway Playhouse during “Dinosaur Zoo” is filled with fun and excitement for the children in attendance. But it should be clear: This show is for your children. I know. “Toy Story” is “for kids, ” and you loved that. The difference is “Toy Story” has the benefit of, well, a story.  This show is pure edutainment. It consists of a series of prehistoric biology facts wrapped in impressive visuals and silly humor. It’s the theatrical equivalent of giving your dog medicine wrapped in cheese, and cheese is the appropriate metaphor here, as the written jokes are pretty basic slapstick and gross-out humor.

The “dinosaurs” (which are puppets) are very realistic and expertly maneuvered by the cast. The extremely affable Aimee Louisanne guides the audience through this interactive experience at a very controlled pace. It sort of feels like an amusement park sea mammal show played back at half speed. The tempo of the show affords the host control over the entire room as well as the individual children who are invited on stage.  A theater full of excited kids was never out of hand for the host and the audience was always engaged.

While the visuals are only fleetingly impressive for the adults, parent enjoyment can be found in the fact that kids really do say the darndest things, especially when confronted by gigantic ultra-realistic dinosaur puppets. 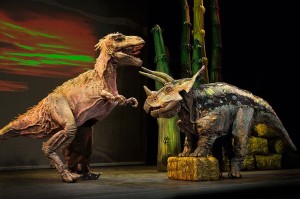 Nine out of ten of the kids brought on stage opening night returned to their seats with titanasaurus-sized grins on their faces, but you’d think after touring for so long there would be a slightly better handling of the youngster fear factor. Telling a terrified child that a giant monster only eats plants is probably not going to soothe them when you’ve already mentioned that the monster is just a puppet. It’s important to note that none of the children in seats were scared in the slightest. Only the volunteers who were too big for their OshKosh bagritches were traumatized for our amusement. And it was adorably amusing.

Ultimately director Scott Wright has created a unique experience in “Dinosaur Zoo” that children will be truly awed by. Simultaneously it provides parents plenty of chances to “aww” at their kids. Though the art design team has done an amazing job, “Dinosaur Zoo” is not as visually impressive as its ticket price suggests. Almost all interaction happens with the kids in the front four rows. So, get close for the most immersive experience. Just remember: you’re renting a Hummer limo with this one. It might be worth it. But if you’re more of a reliable daily driver type, your dollar might go further with a trip to the Field Museum.

Adults without kids:
Skip this one and have a Hummer limousine party. Show “Toy Story” on the flat screens.

Kids:
Dinosaurs! They’re huge! You can touch them! If your parents don’t take you then they are dumb! Dinosaurs! DINOSAURS! (Bill Stern)