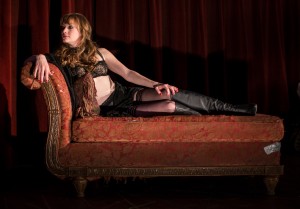 “I like to leave a play behind,” says playwright David Ives. “This play feels very old to me. It’s like four plays ago already.”

The play in question is Ives’ “Venus In Fur” and the show’s great success is the reason I bug him about it for the better part of an hour rather than leave it in his illustrious past. The comedy isn’t just currently in production at the Goodman Theatre; it’s being staged all over the place. “Most produced play in the country this season; not bad.” notes Ives. “I planted that rumor myself. I’m only kidding.” I kid that Noam Chomsky once planted a similar rumor about his own ubiquity. This garners the first of several laughs from the affable former Chicagoan. “I’m happy to be in the same category as Noam.”

Thomas, the author of the play within the play, frequently denies his take on Sacher-Masoch is autobiographical. Thomas’ creator is more forthcoming: “You can’t write a grocery list without being autobiographical. Writing anything, inevitably it’s in your style coming from what your needs are.” Thomas’ needs, parallel to those of Sacher-Masoch’s protagonist Severin, include submission. Vanda finds herself filling the dominant role not just in Thomas’ play, but also in Thomas’ heart. I ask if any publication has tried surprising Ives by sending a dominatrix to interview him. “Would that anyone had been that inventive. No. It’s never been that much fun.” Has the play’s success at least led to any invitations to address, say, an S&M convention? “Would that life were so interesting. People just don’t seem to be using their imaginations that way. I wish they were.”  Reflecting on what such an engagement might actually entail on his part, Ives continues “I don’t know what I would say to them anyway. Those are probably playwrights who feel they’ve written their last play if they’re going to go around lecturing about that. Living off a play… that kind of parasitic living off a play… going to talk about issues… blah blah blah… No thanks.”

Perhaps it was my own attempt to extend this metaphor that led me to start my conversation with the female director of the Goodman’s current production by mentioning I surprised the male playwright with details about the play’s Chicago premiere. 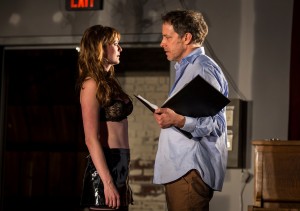 At this production’s start, we hear the briefest bit of “Venus In Furs” by The Velvet Underground. I asked Ives if this was in keeping with his intent. “No that’s a production choice. Frankly if they had asked me I would say: Uh, no. In the production here in New York that Walter Bobbie directed, he and I talked at great length about all of these things and one of the things he decided early on was that the audience was gonna walk in in silence and the show was gonna begin in silence and it would be a lightning bolt and that’s it. Because that’s the play, ya know? Silence, silence, silence—lightning bolt! Once you put music, in fact, once you put music with lyrics in front of the play, you are telling the audience something already when it’s your job to let the play speak for itself. I find the whole use of song in theater to be a doubtful proposition, just because you are adding words to a play that’s made of words.”

I personally am so familiar with the song, hearing one note of it brings all the words right to mind. And I was so taken with Ives’ answer, I forgot to mention that in fact we don’t hear any of the song’s lyrics at the Goodman.

“Put that in the article and send him the article!” instructs director Joanie Schultz, who’s making her Goodman debut with Ives’ one-act. “It’s just a couple of chords. We don’t get to the point where anybody’s singing. There’s something about the play that’s really meta-theatrical in this play-about-a-playness and all these things unfolding on each other. So we thought it would actually be within the spirit of the play [to include the song snippet].”

“There’s a couple different fantasies in the play,” she says. “First is, what is your cliché of a dominatrix? Which is what I think Lou Reed describes in the song—the modern-day cliché—and that’s what Vanda comes dressed as at the beginning. And throughout the play she changes to Sacher-Masoch’s cliché, and then… how does that change into who she really is? There’s a way in which this play is interrogating the idea of sadomasochism. There’s this real true human connection trying to be reached. There’s power sharing and a really beautiful side to this. What I didn’t want to do is give everybody’s fantasy cliché of what this masochistic relationship would be.”

While Ives notes that the script gives no indication of the characters’ ages, Schultz quite deliberately cast a middle-aged man (the excellent Rufus Collins) and a younger woman (the remarkably versatile Amanda Drinkall). “There’s a lot of language Thomas says that sounds like a middle-aged man. All of that stuff about ‘kids today…’ I was really surprised as I read the play to see the casting actually at most other places put them at the same age. Where it seemed really genuine to me for someone a little older to say these things. To me a woman in her mid-twenties and a man in like his mid-forties are actually at their most sexually powerful. Because as far as I can tell most women are really attracted to men in that age group. There’s that sort of cliché that women are always jealous and men just get better with time and I think that that’s true and I wanted to put them in a place that felt like a really similar spot. The other thing I think is really interesting is as theater people they’re both in a place where they’re having massive frustrations. I’m really happy with the way the power dynamic worked out that way. I consider my work as the director a conversation with the playwright, so even though David Ives and I have never spoken I have been in conversation with his work. I’m super aware that I’ve put it through my own lens, and I try to be really aware of and honest about where that conversation is.”

The balance of power between the two characters shifts throughout the play, and in many ways the dominant cultural male-female power dynamic is inverted. But nonetheless it’s Vanda we see owning the stage in sexy, revealing kink wear. It’s still the male lens we’re peeking through. It is Thomas’ play after all. I ask Ives if anyone’s accused him of having his Venus and eating her too. “No I haven’t gotten that, at least not to my face. No one’s been brazen enough to put that question to my face and accuse me of ethical, you know, gender hypocrisy or something. There’s a good question though.” A similar question yields a spirited reply from Schultz. “Look, there’s a way in which part of my own complex reaction to this play and something that Amanda and I were in discussion about the entire time was this thing that I refer to as ‘we have to objectify Amanda.’ There’s a way in which…  she could be giving up what she truly wants to do in order to be his fantasy.” Ives likewise sees the issue of control as more complicated then it may appear based simply on who’s wearing the collar. “Power is ambiguous enough that submission is also a form of power, that’s partly what’s going on in this play as well. Unless you’re talking about a billy club, you enter a grey area about power.”

With the play so heavily centered on issues of sex and power, I’m compelled to ask Ives if working with Roman Polanski on the screenplay for the recent French film version made him question any elements of “Venus In Fur,” given Polanski’s conviction on sexual assault charges in the 1970s. “Never occurred to me. I was just working on the movie.” He explains the film happened quickly; Polanski called up and told Ives he loved the play, and the film was made within a year. And as far as any potential for a Hollywood take on Ives’ tale? “It would go through five screenwriters and sit on a shelf at some backwater film company and never get made.”

One of the things that surprised Ives when they first put the play up in New York was that a huge enthusiastic part of the audience was women. “You know you have a woman walking around stage in lingerie and shiny boots and you figure you’re gonna attract some men. That’s a given. But because the play is not really about that we found that women, and actually lots of women of middle age and older, came back to this play again and again and brought their husbands or boyfriends.” He adds with a hint of bemusement: “Of course it’s a great ‘date play’—that’s what I’ve heard.”

Bringing Sacher-Masoch’s material in from the 1870s didn’t pose any particular problem for Ives. “As we know from Sophocles 2500 years ago and Plato and Euripides, people’s emotional lives have remained fairly much the same. So I like to create sort of elemental plays, where it doesn’t matter if you took it out of 1870. You want to make it a general statement about human beings. So it’s in that theatrical world of everland where life is always the same. It’s in this blank room: a rehearsal room is where anything can happen.”

Ives agrees that my inquiry about his feelings on the show opening for his home crowd is a sportsman’s question. Yet the Chicagoan adds, “The first play I ever saw was at The Goodman Theatre, so there is a funny sort of satisfaction in returning to the Goodman. I saw Pinocchio there when I was seven years old, and undoubtedly it changed my life. But the fairy princess was dressed in leather and very shiny boots.”

The playwright’s humor is integral to the power of “Venus In Fur.” Funny is rare in theater; sexy is even rarer. Ives’ script manages both. I opine that being sexy and being funny both depend on timing. “I never put that together!” he exclaims, “I never put that together.” I ask if he sees other parallels between these two challenging traits. “This is such a fresh thought to me that I have absolutely nothing to say.” As often happened throughout the interview we both laugh, as Ives declares “You totally stopped me.”