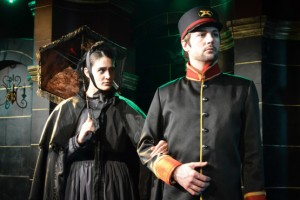 Stephen Sondheim has both refined and blurred the sloppy genre that is our current understanding of lyric theater. With patter mimicking actual speech, the blazing speed of variance in meter and key, and the cheek with which he ends the first act of his first non-opera “Sweeney Todd” with a Verdi-esque quartet, it seems that the only fault that can be laid at his feet is that he is another brilliant pedant. His critics may well ask where the nearly diabolical technique is tapped down to reveal the warmth, the heart-sound behind the mind.

In “Passion,” Sondheim answers all. A lonely child, “not quite beautiful,” brilliant of intellect but stymied of connection, gushing with talent yet grasping for self-worth, only the opening heart of that child grown to adulthood could have given us this second non-opera. With nowhere to applaud, so through-composed as to be completely seamless, “Passion” invites the audience to remember what it was like to love another person for exactly who they are, in exactly that moment.

Boy-Meets-Girl is turned on its head as Fosca, the female who unjustly serves as the story’s antagonist, falls for—and pursues with all her might—the object of her very real love, one Giorgio. In the process Giorgio is gifted with the understanding of the difference between being truly loved and being caught up in an infatuation, such as his affair with the married Clara, who is classically beautiful, yet emotionally unavailable. The 1983 film that inspired Sondheim to begin work on the piece could only have connected with an artist that could slip into the skin of the anti-heroine, Fosca. Had a man pursued a more classically beautiful woman with the ardor that the show’s leading lady chases a desirable male, it would have been considered appropriate. But it was an entirely different matter for a woman to enjoy the same largess. Perhaps this unfortunate scale is still insufficiently tipped, which is reason enough to see this brilliant piece in its current mounting at the No Exit Café by Theo Ubique. Sondheim pours out his heart in aching melodies that would raise the jealousy of Puccini, and the cast delivers them in kind.

I cannot say enough about the ensemble, serving as chorus, sub-principals, and at table (as the establishment offers dinner if desired), all of them more than capable of playing leading roles themselves. Given the intimate space, director Fred Anzevino does well to tap down the expected near-nudity and extreme histrionics. As Fosca, Danni Smith uses her well-modulated mezzo to heroically contained, blazing effect. Colette Todd’s Clara is vocally astute (although the notion of her serving as the Fosca understudy gives one great pause), and Peter Oyloe’s Giorgio, while I wanted a more baritonal casting, delivers the audience to a new dramatic understanding in the final scene. (Aaron Hunt)