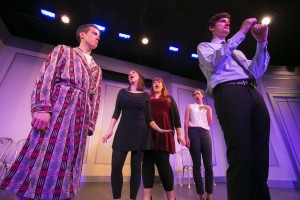 Though you can almost always count on Second City revues to deliver plenty of laughs, thematic consistency isn’t quite as reliable. “Depraved New World”—the 102nd revue to grace the main stage—manages both without short-changing either. And that consistent theme isn’t depravity—though there’s enough of that sprinkled throughout to justify the title. It’s a bit deeper than that. Under the direction of Mick Napier, the cast members of “Depraved New World” (who are also the writers) explore the internal struggle we all go through regarding our own insecurities, shortcomings and frustrations.

This concept is introduced in a song that finds various characters being confronted by their inner voices berating them for telling a stupid joke or asking a stupid question or just not making good enough brownies: in short, for being human. “Does everyone feel this way?” wonders one character after receiving an upbraiding by a nagging inner voice. And the unspoken answer is, “Of course.” Not feeling up to snuff is a universal theme that is instantly relatable to all. It also provides plenty of fodder for laughs.

Over the course of a fast-moving two-hour show, we meet a couple dealing with relationship problems while working at a haunted house, a lawyer having trouble trying to validate the defense of his client and two guys discovering on their first date that they have absolutely nothing in common (well, almost nothing), among other characters. For the most part these characters and the sketches they inhabit feel relatively safe. That’s not to say that they aren’t funny—quite the opposite—but there are only a few moments of outright unexpectedness. 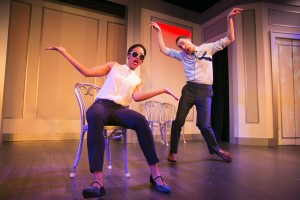 The most memorable of these involves a surreal conversation between Tawny Newsome (fresh from the most recent revue “Let Them Eat Chaos”) and Mike Kosinski (hopping up to the main stage after performing in the last two e.t.c. shows) that features Emily Walker poking about as a brusque bird. I honestly don’t even remember what the bit was about—but the impossibly lengthy and gaspingly funny finale involves Newsome delivering an epic rant, Kosinski prancing about madly (fully using the hilarity of his “irresponsibly thin” limbs waving around) and Walker pecking confusedly. It’s absurd. And it’s also absurdly funny—it reminded me of the constantly surprising hilarity featured in the hipster sketch in “A Clown Car Named Desire” (currently running on the e.t.c. stage)—and not just because Kosinski is in it. “Depraved New World” could use more anarchic moments like this.

John Hartman makes an especially formidable presence throughout, most notably as a somewhat spastic guy giving (terrible) dating advice over YouTube. His physicality in this scene raises what is probably a somewhat middling bit on the page to one of the most memorable of the evening. He uses this intense style of physicality to his advantage again toward the end of the show as half of a redneck couple in a breakup argument. He’s hard not to watch at any given moment.

In the end, we’re not any less aware of our own insecurities or any more comfortable in our skins, but at least we’re reminded that inner turmoil is something everyone deals with. And that it can be mined for comedy in so many delicious ways. (Zach Freeman)