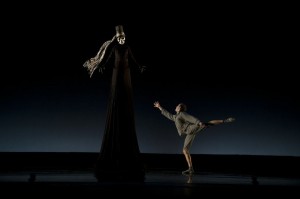 Looking at the ten-year catalog of Boise-based Trey McIntyre Project—which includes dance repertory, short films, spontaneous public performances and community-based collaborations—the old saying about artists being adults who never forgot how to play comes to mind. Technical virtuosity, athleticism, curiosity, humor and cultural reference meet in McIntyre’s work, which has been inspired by the music of Queen, the majesty of Glacier National Park, the Basque population of Boise, and the iconic children’s album from 1972, “Free to Be…You and Me.” TMP’s most recent—and final work as a full-time dance company—is inspired by the illustrations of Edward Gorey. McIntyre said he was drawn to the challenge of presenting surrealist story lines in a story ballet format. “Trying to make an engaging path to move through, when these particular stories don’t follow a traditional story arc, was really fun for me.”

Greyscale costumes bring Gorey’s crosshatched children in Victorian dress and towering grim reaper to life. The music is Shostakovich’s “Piano Trio in E Minor” and will be performed live by the Music Institute of Chicago. At the end of this tour, the Trey McIntyre Project steps into a new iteration as documentarian. Two films are in the works: “Ma Maison,” a retelling of TMP’s long-term collaboration with Preservation Hall Jazz Band, and a collection of interviews and footage of the final tour. (Sharon Hoyer)