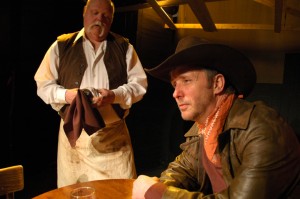 Creators want the best for the things they make; every song composed should win a Grammy, every book can be the great American novel. Given that artists always dream big, it’s a bitter disappointment when an impulse evolves into something they hadn’t planned on. Just ask a screenwriter.

A carpenter (a suitably laconic Sean Thomas) tracks down his creation (livewire Anthony Stamilio) through the rough-n-tumble West. After drinkin’, lovin’ and killin’, the carpenter’s puppet has become human, leaving a trail of devastation in his wake. Pinocchio’s a real boy, and that ain’t good.

Thomas’ sadness captures the horror his work wracks up and Stamilio’s goofy energy belies the devastation his character leaves behind. A revulsion-tinged monologue from Jillian Rea creepily communicates what it’s like to be the object of this creature’s affections.

Director Aaron Henrickson’s staging makes the most of the small side project stage; his use of Dustin Pettigrew’s Western exoskeleton set is inventive. Playwright Dan Caffrey’s language is florid but not overwritten; he captures the supernatural feeling the piece is after. The use of the slow, measured tempo the piece employs is effective, but a bit wearing; there’s only so much “Fistful of Dollars” one can take. I hoped for a bit more conflict in the story; nothing stops the carpenter in his quest and it’s the obstacles that make things interesting. Flaws aside, the show is a compelling,  melancholy look at what becomes of a sidetracked vision. (Lisa Buscani)