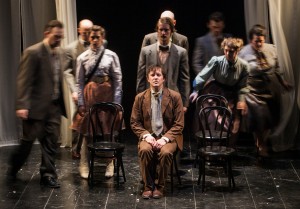 Guy De Maupassant’s short story on the jewels of one Monsieur Lantin succeeds largely on its thrifty pacing and its economy of detail. By the time you’ve settled into the notion of Lantin’s domestic bliss with his young bride, the joy ends with her death; and while Lantin’s suspicions following her demise appear well-founded, the story leaves his suspicions mostly unexplored.

TUTA Theatre’s adaptation “The Jewels” draws Maupassant’s tidy tale of role reversal and sullied ideals out to an hour and a half—adding backstory about the couple, sending us to seemingly full days at the office with Lantin’s coworkers, updating the setting to the 1920s for some unknown reason, and yet adding nothing essential to the story. Rather, all this embellishment weighs down the agile fiction; the great impact of reading the original is undoubtedly tied to the author’s brevity.

All this extra time with Rene Lantin runs the risk of making the character as un-engaging as the story only hints he is, but Layne Manzer in the lead manages to make Lantin more sympathetic as his life spirals downward. Carolyn Molloy is endearing as Emily, the bride who declares two loves aside from her true devotion to her clerical and artless husband.

Emily’s two admitted extramarital fascinations are jewelry and the arts—theater in particular—both of which Rene dismisses as fake and useless. Turns out he’s at least wrong about the trinkets Emily wore in life. Desperate and broke without his wife to manage household affairs, M Lantin resorts to selling his wife’s ornaments to jewelers only to discover the presumed plaster to be quite authentic and valuable enough to make him rich. He deduces they were likely the gifts of other suitors.

During Emily’s trips out of the house we are exposed to one ongoing bit of theatrical flourish—a stagey allegorical take on the domestic life of Rene and Emily—the life of a young girl who has taken in a fuddy duddy broken-winged bird. The girl’s kindness to strangers only leads her to be destroyed by a greedy flock of avian assailants, much as we are shown Emily’s presumed profitable promiscuousness led to her young death. This is an unnecessary addition to the original story, but in the context of this production brings some humor while further swaying us to Emily’s side as she suffers her husband’s increasing dismissiveness in the days leading to her sorry end.

There’s much to enjoy about director Kirk Anderson’s staging. The movement sequences are fluid and graceful, the cast exudes sincerity and the near slapstick payoff of seeing Maupassant’s ironic ending enacted ends the show with a welcome laugh. It’s just that all this effort could be better expended in the effort of a more appropriate adaptation. Maupassant’s original tale is a textbook example of where less is more, and by its very nature TUTA’s production instead tries for more by adding more. (Raymond Rehayem)