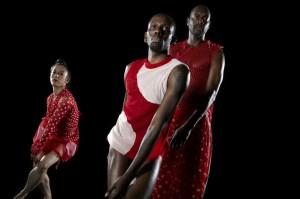 Like so many experiences in life, the profundity of performance is in simple, honest moments—a gesture, the repetition of a phrase physical or sung, courageous silences—and there is no question: the work of Reggie Wilson resonates deep. Wilson’s work, inspired by the spirituality of the African Diaspora, seems raw on the surface, but the precise craft of his movement language, use of music, staging and light come together with a specificity that strips away anything extra and distills the performance down to its very soul. His most recent piece, “Moses(es),” is a visual poem on migration and culture, inspired by Zora Neale Hurston’s novel “Moses, Man of the Mountains.” Wilson spent three years developing the project, starting with a trip to Israel—part of his ongoing extensive travels across the globe—followed by more than a year of research with Northwestern University dance historian Susan Manning, finally entering the studio with his company about a year before the premiere in 2013. The deliberate process of creating “Moses(es)” comes through in the execution: it is a finely honed work, comprised of a series of short episodes—each carefully reduced to its purest form—and bookended by familiar spirituals. The result is that one need not have any of the context above to experience in this work something universal, longing, joyful and beyond language. (Sharon Hoyer)