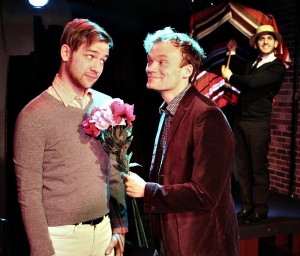 The musical or operetta or opera or lyric theater phoneme (depending upon whom you speak with and how empty the champagne bottle) “Candide” was birthed by Voltaire, and enjoyed the word-workings and “improvements” of Lillian Hellman, Hugh Wheeler, Richard Wilbur, John Latouche, Dorothy Parker, Stephen Sondheim, John Mauceri and John Wells. But the amorphous masterpiece is held together by the duct tape of Leonard Bernstein’s music. Compositionally, harmonically, thematically, the music drags all of the wordsmiths’ brilliant meanderings into a solidified celebration. And this remains the accepted formula for a successful musical evening of theater; the task of stitching together the genius of the book-writer, the librettist, and multiple credited- and uncredited-script doctors falls squarely upon the shoulders of the composer.

But must it always be so? What if a myriad of composers contribute to a work that congeals by the alchemy of a single lyricist? Pride Films & Plays’ production of “Songs From An Unmade Bed” does exactly that. What is more cutting edge than a lyric entertainment that supports music from composers as far afield as contemporary opera giant Jake Heggie, and singer, songwriter, actress and composer Debra Barsha? Lyricist Mark Campbell, who has been profiled in Opera News as one of the twenty-five people “posed…to become major forces in opera in the coming decade,” is proven by this production to be a person who tells stories, stories that we all want to hear, to take to our hearts, and then take home and hash and rehash. The “cross-over” between musical theater and opera for which we must revere and blame that Sondheim fellow continues to redefine what brings a contemporary audience to a seat in a theater.

Director Derek Van Barham’s cast delivers scintillating slivers of an on-again, off-again gay male relationship that shivers resonance for anyone who has dared to love, and then run to a private corner and attempted to make mathematical sense of heart-flow. The evening begins in a lower-level, brick-walled Chicago speakeasy atmosphere, with a small cash bar thrown into the mix. This conceit is heightened by a pre-show performance by one of the two understudies—accompanied by the stylings of musical director Robert Ollis’ ivories and a cello—singing show tunes and standards. We’re in a cabaret bar; and then a relationship unfolds right before us, and it is impossible to miss a moment of connection. Kevin Webb (who Neil Patrick Harris will eventually sue for stealing his looks and his voice) is a wonderful comic foil to Jordan Phelps’ bubbling-under-the-surface quiet guy. Both look great in their underpants, sing beautifully, morph effortlessly between musical styles, and fall into each other like cream bleeds into coffee. (Aaron Hunt)