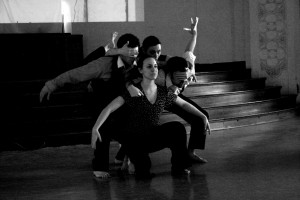 What, exactly, is danz theatre? According to modern dance pioneer Rudolf Von Laban, danz theatre seeks “to unite all art media to achieve an all-embracing, radical change in humankind.” Such are the roots of Ellyzabeth Adler’s Chicago Danztheatre Ensemble. As her mission declares, this is “performance with a purpose.”

“The Fluid Flow Fluidly,” choreographed by Brittany Brown, uses a series of mantras and a rich, striking movement vocabulary to invite the audience into a state of flow. Lisa Leszczewicz’s “Penumbra” dances us through the “space between shadow and light” and explores the process of change. Ellyzabeth Adler breathes fresh life into T.S. Eliot’s The Wasteland with a haunting mix of dance, physical theater, music and visual art. Following WWI, Eliot’s poem expressed the confusion and longing of a “lost generation.” Adler’s performance sheds light on our own wastelands—those parts of life which are decaying both inside and out, individually and collectively. Her work gives voice to the connection we seek and the beauty that may be found despite, or even because of, the wasteland.

“Still Small Voices,” written by Maren Rosenberg directed by Alexander St. John, follows Alice, a Jewish-American girl, on her birthright trip to Israel. Curiosity leads Alice to the West Bank where she begins to question what she had once taken for truth. The performance combines visuals, music and acting in English, Hebrew and Arabic. The piece gives voice to untold stories and unsung songs, hitting us in the heart to remember the humanity in humans we have not met and have not spoken to.

As we begin, ever so slowly, to move into spring, Chicago Danztheatre Ensemble encourages us to stretch our minds and open our hearts to new ideas and new possibilities. (Lauren Nelson)