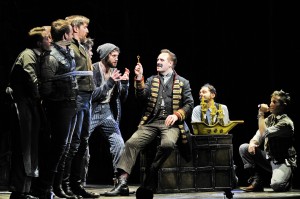 Superhero origin stories are interesting beasts. We know precisely where the story will end up (a hero is born!) before it even begins. What matters in this subgenre (if that’s what it can be called) is not so much what the ultimate outcome is, but rather how to get the story from point T-minus A to point A in the most interesting way without making the pre-known destination look like a foregone conclusion. And of course it’s preferable to toss some new characters into the mix while also providing new insight into existing characters. “Peter and the Starcatcher”—written by Rick Elice based on a book by Dave Barry and Ridley Pearson—handles most of these tasks with goofy gusto, giving us a helter-skelter background story for the puckish Peter Pan.

The original Broadway production won five Tony Awards in 2012 (winners for scenic, costume, lighting and sound design serve as the design team for this production and it certainly shows). The imaginative design work—a clever combination of faux bootstrappy big-budget costumes and set pieces and truly elaborate lighting and sound design—helps to sell a story that may not necessarily be more than the sum of its parts. Because despite the impressively inventive delivery of this story by an energetic and engaged cast—directors Roger Rees and Alex Timbers pull earnestness and meta-asides from these actors in equal measure—Elice’s script is a bit too self-indulgently silly for its own good.

It seems that “Starcatcher” can’t quite decide if it wants to be for kids or for grownups. For the most part the comedy seems over-the-top enough to connect with a younger crowd, but its non-kid jokes aren’t subtle enough to escape detection. After a pun that stressed the “Ass” in the last name “Aster” the young girl in the seat next to me turned to her mother and said adamantly, “This is NOT a play for kids. There are a LOT of bad words.” To be fair, this same girl had been giggling merrily to herself a few minutes prior when a pirate loudly passed gas into another character’s face. But fart jokes and ass puns aren’t the only things “Starcatcher” has to offer; like the angsty, arrogant Peter Pan from the original J.M. Barrie story, it’s quite charming in its own way. 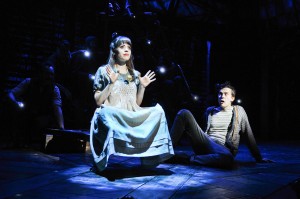 The story may be somewhat disconnected but it’s delivered in such a way that you can overlook this shortcoming, as long as you’re willing to turn off and just float along. Looking for deeper meaning is not a fruitful expedition. There’s something about a secret order of starcatchers (represented by the cocksure Molly—a peppy Megan Stern) who capture a substance known as “starstuff” when it falls from the sky and use it for secret purposes. A gang of pirates led by the dastardly but foppish Black Stache (John Sanders—an understudy in the Broadway production who steals the show here) is out to capture the “starstuff” but Molly and Boy (the future Peter Pan, played with earnest intensity by Joey deBettencourt) must stop them.

It’s all thoroughly sort of amusing and frequently smile-inducing. By the end we can see how the infamous Peter Pan came into being and we’ve definitely learned a few new things about familiar characters, but that’s what we expect from a prequel. The lighthearted energy of the storytelling keeps the story flowing nicely and makes it feel shorter than its two-hour-and-fifteen-minute running time and while many of the jokes are almost groan-worthy there are also plenty of solid laughs as well. “Peter and the Starcatcher” is certainly a hard show not to like. But it’s also a tough one to love. (Zach Freeman)