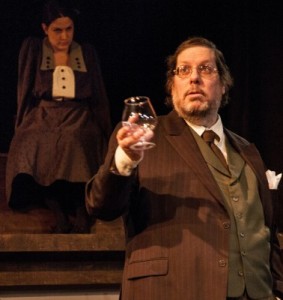 The early spring evening turned ominously autumnal as I approached the holy stone building that houses City Lit Theater. Unfortunately nothing nearly as spooky transpired inside during City Lit’s world-premiere adaptation of “The Haunting of Hill House.” City Lit specializes, as their name implies, in bringing literary works to the stage. Here they adapt an acclaimed novel by Shirley Jackson, best remembered for her unnerving short story “The Lottery.” The tale of Hill House centers on an investigation of its purported supernatural characteristics spearheaded by one Dr. Montague (an appropriately haughty Edward Kuffert) and the effect his exploratory stay in the old mansion has on the doctor and the handful of guests he has invited to join him.

The book is widely praised as an exemplar of psychological terror and was turned into a well-regarded film within a few years of its 1959 release. Owing to its literary origins, this Hill House is a wordy affair. The 1963 movie version has the cinematic bag of tricks at its disposal to assist in the transition to the big screen. This stage adaptation instead embraces the verbosity as a strength, which—despite the convincing set design, heavy reliance on flashy lighting and thunderous sound effects and amenable turns from a capable cast—yields an evening not so different from a staged reading. Indeed, much of the production’s nearly two-and-a-half hours is given over to a pair of narrators.

The doctor’s guests—at least the ladies—startle with unconvincing ease and are equally quick to turn on each other. While some of the eerie happenings are presumably authentic, and others imagined by the protagonists, none are particularly frightening or even unsettling from a seat in the audience.

The performances are outsized and over-the-top, spot-on for the intentionally funny scenes and even helpful in selling the more reflective moments, but detrimental to any sense of suspense. It’s the deliberate humor that works best, and the production takes a decided turn for the better with the arrival of Elaine Carlson as the doctor’s occult-devotee wife accompanied by a funny Kingsley Day as her absurdly rigid driver. Mary Anne Bowman and Julia Kessler are earnest as a pair drawn together by the shared experience of their summer stay but the actresses aren’t given enough of the play’s strength—the comic bits—to really shine.

It’s possible Jackson’s tale, so riveting on the page and so well-adapted to the silver screen by Robert Wise, is inherently ill-suited for the stage. Regardless, there is the seed of a very entertaining show in the City Lit take. Of the humor in the play, that which centers on Mrs. Montague and which explicitly mocks the very notion of the supernatural is by far most effective. Were adapter/director Paul Edwards to hand over the whole production to a similarly inspired spoof of the psychological horror genre, I’d be heading back to his Hill House for a second viewing and imploring you, dear reader, to join me. (Raymond Rehayem)